The top United Nations human rights official has called on Saudi Arabia and Turkey to “reveal everything they know” about the disappearance of Jamal Khashoggi.

The Saudi journalist and critic of the Kingdom has not been seen since he visited his country’s consulate in Istanbul on the afternoon of 2 October, Michelle Bachelet said in a statement.

Speaking to journalists in Geneva amid news reports that details of Mr. Khashoggi’s death may surface soon, indicating that it was an accident, UN human rights office (OHCHR) spokesperson, Rupert Colville, noted the High Commissioner’s belief that “two weeks is a very long time for the probable scene of a crime not to be subject to a forensic investigation”.

He noted that “in view of the seriousness of the situation”, the High Commissioner had also called for diplomatic immunity to be “waived immediately” to allow for a “prompt, thorough, effective, impartial and transparent” investigation.

Anyone responsible should be held accountable, and that means anyone - Rupert Colville, OHCHR

Protection from national jurisdictions is bestowed on consular premises and officials by treaties such as the 1963 Vienna Convention on Consular Relations, Mr. Colville explained, before noting that Ms. Bachelet had welcomed the agreement between Saudi Arabia and Turkey allowing investigators to enter Saudi buildings in Istanbul.

But potentially serious crimes had been committed, he insisted, and the perpetrators should be held accountable.

“The one thing we really know as a solid fact is that Mr. Khashoggi went into the consulate and he…was never seen coming out again,” Mr. Colville said, adding that it seemed “very probable” that some crime had been committed.

“Enforced disappearance or murder, if that has occurred, extra-judicial killing, either way, those are very serious crimes,” he added. “We all need to know what it was, how it happened and who was responsible and where the evidence leads”.

Responding to a question about whether there was a chance that the probe into Mr. Khashoggi’s disappearance risked becoming a “whitewash”, Mr. Colville said there was no question of impunity.

“Anyone responsible should be held accountable, and that means anyone,” he said, “who committed a crime or who was involved in the planning of the crime or executing it. There should be accountability; if it’s a serious crime, that’s a fundamental principle of law; national law and international law.”

♦ Receive daily updates directly in your inbox - Subscribe here to a topic.
♦ Download the UN News app for your iOS or Android devices.
Saudi Arabia|turkey 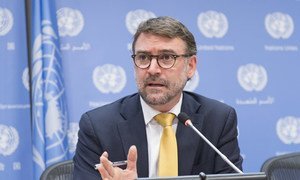