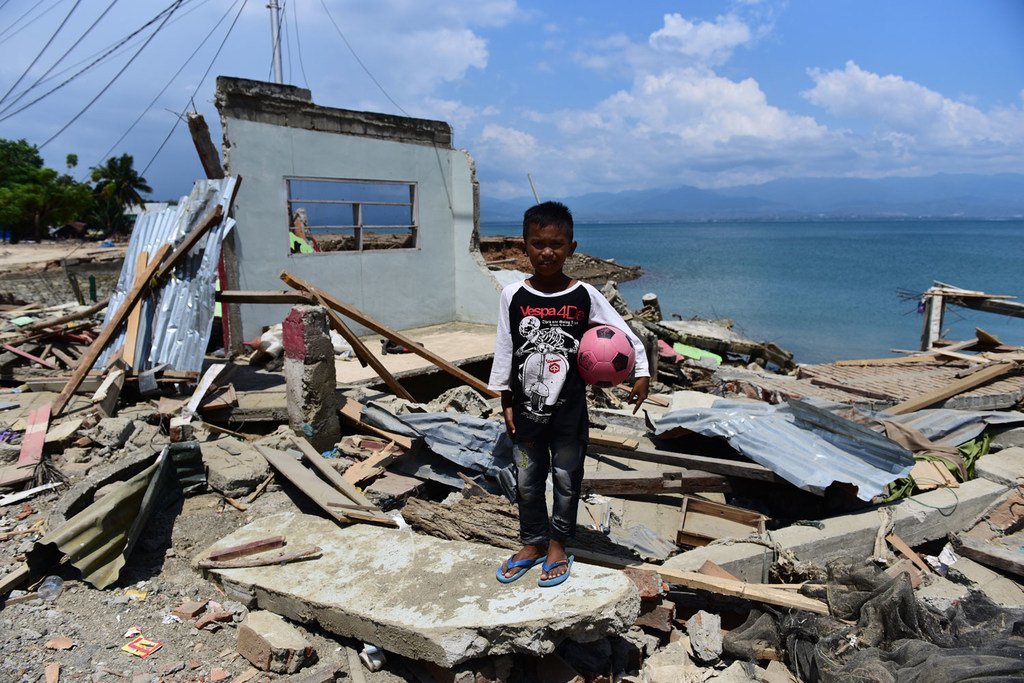 UNICEF/Wilander
A ten-year-old child stands in front of his home, which was destroyed by the tsunami in Central Sulawesi, Indonesia.
13 October 2018
Humanitarian Aid

Highlighting the steep human and economic impact of disasters, United Nations Secretary-General António Guterres has called on countries to improve data collection on the catastrophes, including comprehensive accounting of economic losses, to advance progress on crisis prevention.

In a message commemorating the International Day for Disaster Reduction – which this year fell shortly after the devastating earthquake and tsunami in Indonesia – Mr. Guterres said that measuring economic losses “can also motivate Governments to do more” to achieve the targets of the Sendai Framework for Disaster Risk Reduction.

“A better understanding of the economic losses from extreme weather events can help to generate greater action on climate change and increased ambition on reducing greenhouse gas emissions,” he said.

“Reducing the economic losses from disasters has the power to transform lives and contribute greatly to the eradication of poverty.”

Globally, millions are affected, lose their homes and livelihoods as a result of extreme weather events and natural disasters, while economic losses cost nations billions of dollars.

However in spite of the staggering impact, not all countries report systematically on the economic losses from major disaster events, according to a recent report by the UN Office for Disaster Risk Reduction (UNISDR).

Improving data collection and analysis, can therefore, bring immense benefits to all countries in not only reducing economic losses, but also saving lives and livelihoods and managing disaster risk, said UNISDR.

This year, the International Day focuses on Target C of the Sendai Framework, reducing disaster economic losses in relation to global GDP by 2030. Agreed by UN Member States, in 2015, the Sendai Framework includes seven targets and four priorities for action to reduce disaster risk.

Held every 13 October, the International Day for Disaster Reduction celebrates how people and communities around the world are reducing their exposure to disasters and raising awareness about the importance of reining in the risks that they face.

Standing amidst the wreckage of Balaroa, one of the worst hit areas of Palu, Indonesia, on Friday, UN Secretary-General António Guterres said it was “impossible not to feel heart-broken” at the destruction caused by the huge earthquake and tsunami that struck the island of Sulawesi two weeks ago.