Malaysia has announced that it plans to abolish executions, a move hailed by United Nations chief António Guterres on Thursday, as a “major step forward.”

The nation joins some 170 other States that have implemented a moratorium, or ended the practice of the death penalty; a policy that the Secretary-General endorsed earlier this week, commemorating the World Day against the Death Penalty, on 10 October.

Spokesperson for Mr. Guterres, Stéphane Dujarric, said in a statement that the UN chief saw the decision as a stride toward eliminating the death penalty worldwide.

“The Secretary-General commends this decision as a major step forward in a global movement towards the universal abolition of the death penalty,” said the statement.

In the United States on Thursday, the Pacific north-western state of Washington’s supreme court also announced that it was striking down the death penalty on constitutional grounds, making Washington one of 19 US states who’ve imposed a ban.

Earlier this week, the UN Chief urged all nations to “put an end to the death penalty now,” noting that in some parts of the world, executions are still carried out in secret, or without due process.

Mr. Dujarric said that in Secretary-General’s salute to Malaysia’s repeal, the chief “seizes this opportunity to call on all countries which still retain it, to follow the encouraging example of Malaysia.” 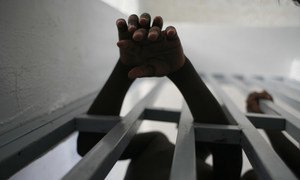 Progress made toward eliminating the death penalty has been “marred by setbacks,” said United Nations Secretary-General António Guterres in a statement on Wednesday, marking the 16th World Day Against the Death Penalty.