UNICEF/UN0240792/Wilander
Rido Saputra, 10 years old, stands in front of his home which was destroyed by the tsunami in Donggala Regency, Central Sulawesi, Indonesia (3 October).

UN Secretary-General António Guterres, has called for Governments across South-East Asia, to take a lead in the fight against global warming and the damaging impact of climate change.

He was speaking at a leaders’ meeting on Thursday of the Association of South-East Asian Nations (ASEAN), in Bali, Indonesia.

The UN chief expressed his condolences and solidarity with all those affected by the earthquake and tsunami in the Indonesian island of Sulawesi, and pointed out that four of the countries most affected by the disaster are ASEAN members: Myanmar, the Philippines, Thailand, and Viet Nam.

He reiterated his strong commitment to the ASEAN-UN Action Plan on Environment and Climate Change; a roadmap containing several measures to improve collaboration between the two organizations, and work towards implementing the UN’s 2030 Agenda for Sustainable Development, described by the UN as a “blueprint to transform the world.”

Referring to Monday’s special report from the Intergovernmental Panel on Climate Change (IPCC), which laid out the devastating consequences of a world that fails to keep global warming to 1.5°C, Mr. Guterres told the leaders that it “makes clear that climate change is running faster than we are – and we are running out of time.”

Urgent action from Member States, said Mr. Guterres, must be far more ambitious, with “unprecedented changes in all aspects of society to cut emissions by half by 2030 and reach net zero emissions by 2050 – especially in key sectors such as land, energy, industry, buildings, transport and cities.”

The UN chief described specific examples of action, including an end to deforestation, a drastic reduction of fossil fuel use and a ramping up of renewables; investment in climate-friendly sustainable agriculture; and research into new technologies such as carbon capture and storage.

Mr. Guterres described December’s upcoming UN climate summit in Katowice, Poland (COP24) as a “key moment,” and an “opportunity for leaders and partners to showcase their ambition.”

“I urge you to do all you can to resolve the sticking points and make sure the world leaves Katowice with critically important implementation guidelines for operationalizing the Paris Agreement,” said the UN chief. “This is a must.  And I count on ASEAN’s leadership.”

On Friday, Mr. Guterres will travel to the city of Palu, Central Sulawesi, to see for himself the devastating effects of the tsunami and earthquake.

On Friday, UN chief @antonioguterres travels to Palu, central Sulawesi, to see for himself the devastating effects of the tsunami &amp; earthquake▶️ https://t.co/tlcSxf6oLH …#UNNewsStory @UNOCHA pic.twitter.com/6vWWj4cx4i 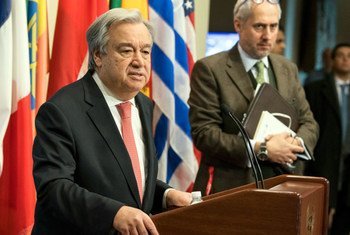 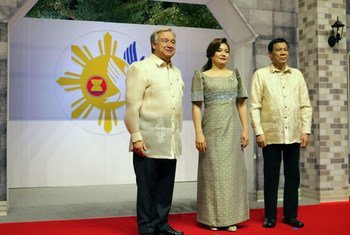