© UNICEF/Arimacs Wilander
A man walks past a car hanging on the roof of a house in the aftermath of the tsunami which struck after an earthquake hit Palu, Central Sulawesi, Indonesia. (29 September 2018)

Following the series of devastating earthquakes, tsunami and landslides on 28 September in Indonesia, the death toll has risen to 2,010, with around 10,700 seriously injured and nearly 700 still reported missing, according to United Nations agencies on Tuesday.

Agencies are on the ground supporting the Government-led response and targeting 191,000 of the most vulnerable, with shelter, food, clean water and other life-saving assistance.

Immediately after the earthquake and tsunami, local responders on the ground began efforts to rescue people trapped in the rubble of collapsed buildings and provide urgent assistance to survivors.

Although physical access remains a challenge, progress is being made in reaching affected areas, according to the UN Office for the Coordination of Humanitarian Affairs (OCHA) and “the humanitarian response is being scaled up” by UN agencies, international and national non-governmental organisations (NGOs), and the Indonesian Red Cross, in line with the Indonesian Government’s priorities.

More than 67,000 houses have been severely damaged or destroyed by the earthquake, tsunami and resulting landslides of liquified earth, leaving some 330,000 people without adequate shelter. Around 62,400 people have been displaced by the disaster and are staying in temporary sites with limited access to life-saving services. According to the national agency for disaster management (BNPB), more than 2,700 schools have been damaged, as well as 20 heath facilities and water supply systems.

To respond to the most pressing needs, the International Organization for Migration is providing 28,000 gallons of bottled water and 1,700 emergency shelters. The World Food Programme’s logisticians have set up temporary storage structures to enable effective management and dispatching of aid items.

As children and women are particularly vulnerable in post-disaster contexts, protection services have been put in place, including child reunification efforts led by the UN Children’s Fund UNICEF, to assist the many separated children, and medical tents set up by the UN Population Fund (UNFPA) to provide reproductive care. Hygiene and maternity kits have been distributed and a team of midwives has been deployed.

Shortly after the disaster, the OCHA-managed Central Emergency Response Fund allocated US$15 million to support humanitarian activities on the ground, in particular those laid out in the response plan, prepared by the UN in collaboration with the Government. The plan calls for $50.5 million to reach 191,000 of the worst-affected women, children and men. 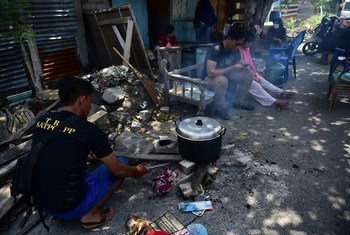 Aid is getting through to victims of last Friday’s deadly earthquake and tsunami, which struck the Indonesian island of Sulawesi, but stricken communities are still in dire need, UN aid agencies said on Friday. 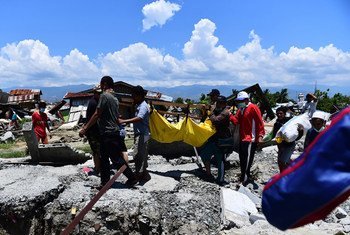 Four days after a deadly earthquake and tsunami hit the Indonesian island of Sulawesi, UN agencies and partners have warned that some communities have yet to be reached and the death toll may rise, as the scale of the destruction unfolds