Senior United Nations officials on Sunday called for stronger joint humanitarian and development interventions in Chad as the crisis-riven central African country as it tackles poverty, displacement, malnutrition, and lack of access to basic social services.

“I was profoundly touched by the plight of the women and children I met in the nutrition centre in N’Djamena today,” said Mr. Lowcock, who heads up the UN Office for Coordination of Humanitarian Affairs (OCHA).

While he commended the efforts and actions undertaken to deal with one of the biggest nutrition crises the people of Chad have faced, he stressed that the bigger challenge is to prevent children being in this position to start with.

“Humanitarian assistance can save lives, but the solution is development, economic progress and better livelihoods. The United Nations stands ready to support the Government, who must lead in this process,” he said.

“The challenges the country faces have roots in development deficits and climatic realities that have made living conditions for communities caught up in the crisis, even worse,” said Mr. Steiner, adding that there was urgent need for a scale up in the response.

Around 4.9 million people are in need of urgent support, with the majority of them food insecure. Over half a million are in need of shelter: “We call upon our partners to engage in multiyear financing to facilitate mid and longer-term planning. Stepping up now will help us address the crisis today, tackle the underlying causes and help people build resilience to better cope with and be able to stand on their own after the crisis,” Mr. Steiner added.

The humanitarian response plan 2018 in Chad requires $544 million to respond to the needs of the 2.1 million people who are the most vulnerable in the country. To date, only 35.6 per cent of the funding has been received.

This visit concludes a three-day trip to Nigeria and Chad, during which the two UN officials looked at ways both humanitarian and development actors can better support national support efforts, including in the Lake Chad Basin crisis. While in Nigeria, Mr. Steiner and Mr. Lowcock called for more support to ease the humanitarian crisis and rebuild lives in conflict-ravaged north-eastern part of the country. 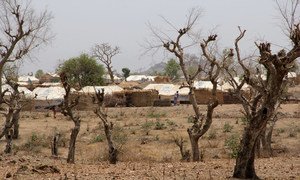 A United Nations-backed humanitarian conference to raise much needed resources for relief, development and peacebuilding programmes in Africa’s Lake Chad Basin concluded on Tuesday, raising some $2.17 billion in support and about $467 million in concessional loans for the crisis-ridden region.