UNAMA/Fardin Waezi
A funeral takes place for a Tolo news agency journalist killed in an attack on 5 September 2018 outside a sports centre in Kabul, Afghanistan (file).
7 October 2018
Peace and Security

The United Nations on Sunday called on anti-Government elements in Afghanistan to immediately stop using improvised explosive devices (IEDs) in civilian areas, after the UN mission in the country recorded a sharp rise in civilian casualties caused by the explosives this year.

A special report by the UN Assistance Mission in Afghanistan (UNAMA) revealed that between 1 January and 30 September 2018, IEDs have caused almost half of the civilian casualties from conflict-related violence.

“Deliberately targeting civilians is a war crime and cannot be tolerated,” said UNAMA chief Tadamichi Yamamoto in a press release on the report, which noted the killing and maiming of Afghan civilians by improvised explosive devises, particularly suicide devices, has reached “extreme levels” in Afghanistan.

The special report outlines serious concern over the increased number of deliberate and indiscriminate attacks by anti-Government elements against the civilian population. 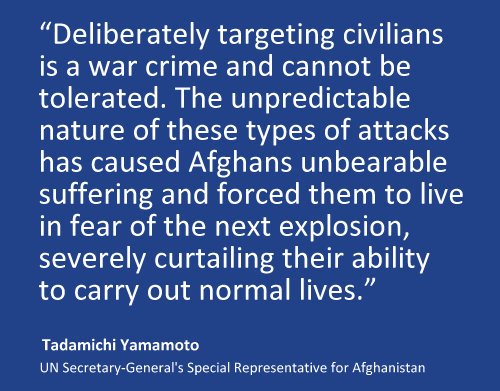 These attacks primarily involved the use of suicide and non-suicide IEDs: bombs designed, planned and placed to detonate among crowds of civilians to kill and maim Afghan men, women and children; destroy livelihoods; disrupt lives; and create terror among survivors.

The report identifies the victims of these deliberate attacks as including midwifery students and students preparing for university entrance exams; players and spectators at cricket and wrestling matches; worshippers at mosques; humanitarian aid workers; education officials; civilian government staff providing essential services to Afghans, as well as civilians seeking to access those government services; and election workers, and men and women attempting to participate in the electoral process.

“Beyond the immediate and direct harm caused to victims and their families, the long-lasting effects of suicide and other IED attacks on the wider civilian population cannot be ignored,” said Mr. Yamamoto, the top UN official in the country.

He also stressed that the unpredictable nature of these types of attacks has caused Afghans “unbearable suffering” and forced them to live in fear of the next explosion, severely curtailing their ability to carry out normal lives.

UNAMA maintains that all parties must immediately cease the deliberate targeting of civilians and civilian objects, and provides recommendations in the report for immediate measures to be taken to prevent further civilian deaths and injuries from these attacks. 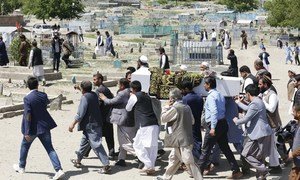