Denouncing the execution of a juvenile offender in Iran, whose trial was also reportedly marred by irregularities, the top United Nations human rights official has called on the country to end the use of the death penalty for those under-18, in line with its obligations under international law.

Zeinab Sekaanvand Lokran was convicted of murdering her husband in 2012, when she was 17-years-old. She was executed this week, despite a number of appeals from UN Special Rapporteurs.

“The sheer injustice in the case of Zeinab Sekaanvand Lokran is deeply distressing,” Michelle Bachelet, the UN High Commissioner for Human Rights, said in a news release on Friday.

“The serious question marks over her conviction appear not to have been adequately addressed before she was executed. The bottom line is that she was a juvenile at the time the offence was committed, and international law clearly prohibits the execution of juvenile offenders.”

According to the High Commissioner’s office (OHCHR), Ms. Sekaanvand’s detention and trial were also marred by reports that she was beaten by police officers following her arrest, forced to make a false confession, and denied access to a lawyer until her final trial session, where she recanted her confession.

In addition, claims that Ms. Sekaanvand had been a victim of domestic violence were reportedly not adequately examined during the judicial process. She was executed on 2 October, and her family was given just one day’s notice, for a final visit.

The news release also noted that dozens of other convicted juvenile offenders reportedly remain on death row in Iran, which has already executed at least five juvenile offenders so far this year. Executions are often carried out with little warning, and without proper scrutiny and transparency.

“As a State party to both the Convention on the Rights of the Child and the International Covenant on Civil and Political Rights, Iran has an obligation to abide by their provisions and to end the use of the death penalty against juvenile offenders,” expressed Ms. Bachelet.

The UN rights chief also called for an end to the death penalty in all circumstances, as no judiciary in any part of the world can fully avoid miscarriages of justice.

Article 6.5 of the International Covenant on Civil and Political Rights states that death sentence “shall not be imposed for crimes committed by persons below eighteen years of age and shall not be carried out on pregnant women.”

In addition, the Convention on the Rights of the Child, requires all States Parties to ensure that no child shall be subjected to torture or other cruel, inhuman or degrading treatment or punishment and “neither capital punishment nor life imprisonment without possibility of release shall be imposed for offences committed by persons below 18 years of age.” 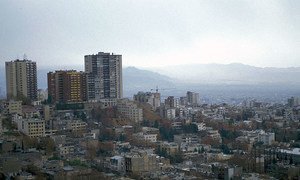