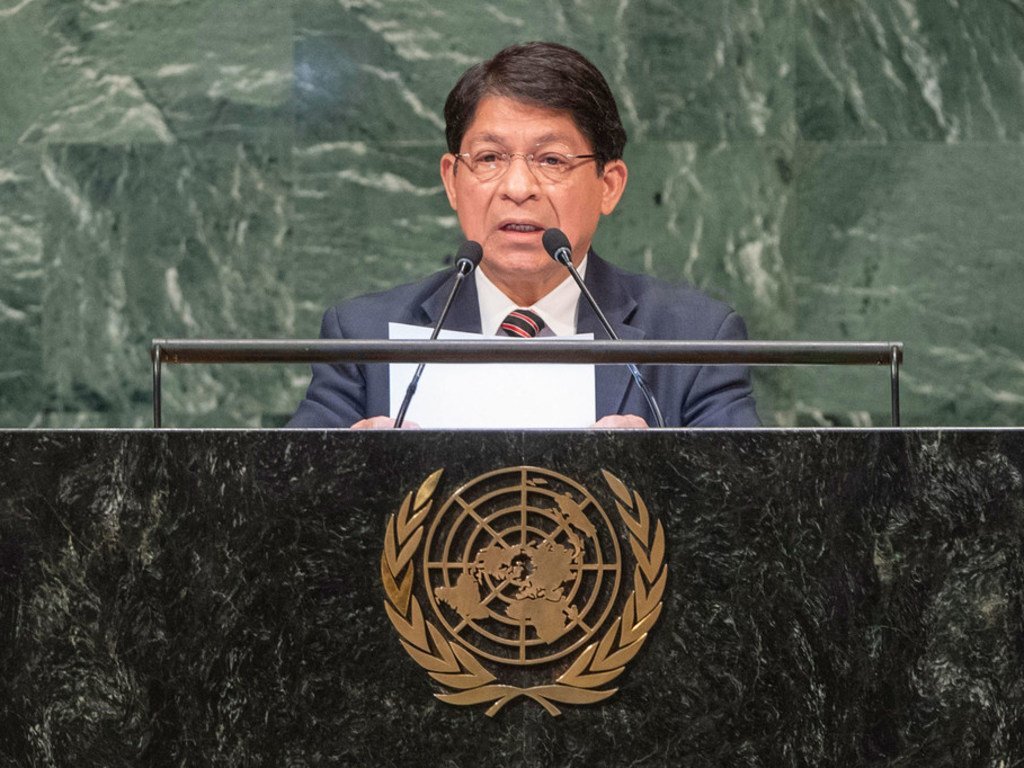 While the world was in the midst of a crisis largely sparked by interventionism and “savage capitalism”, Nicaragua continued to bolster peace, strengthen security, “and…promote and defend human rights,” Minister for Foreign Affairs Denis Moncada Colindres told the United Nations General Assembly on Monday, underscoring his country’s commitment to the UN Charter.

With democratic institutions in Nicaragua imperiled after a recently unsuccessful attempted coup d’état, Mr. Moncada made clear that the success of the Sustainable Development Goals (SDGs) set out in the 2030 Agenda is “in crisis.”

“The attempted coup d’état that we have conquered in Nicaragua is the result of this interventionism, he explained, denouncing the events as “terrorism disguised as peaceful protest,’ which had led to, among others, the heinous killing of citizens and policemen, as well as extortion and torture.

In a call to action against the growing tide of unilateral and interventionist policies, the Minister told the assembled leaders “we must work for justice, peace, respect, dialogue, [and] sovereign security in the world.

He called for “complete nuclear disarmament,” and supported the denuclearization of the Korean Peninsula, hailing this as a “breakthrough to alleviate the tension.”

Condemning economic sanctions against neighboring Cuba, he emphasized that “Nicaragua rejects any coercive economic measures to try to bend the will and spirit of freedom and sovereignty of peoples.”

The Minister spoke strongly that Nicaragua’s virtues of “social development, poverty reduction, gender equity, and citizen security” provide a strong impediment against terrorist incursion, and stand with Syria in that country’s continued fight against international terrorism.

Turning to climate change, he said that “those responsible for depredation, degradation, and imbalances in nature must recognize our losses and damages and contribute with the recovery.”

Mr. Moncada concluded that “to achieve the Sustainable Development Goals, we need to repeal the unilateral coercive measures that are in violation of international law and that impede the development plans of our countries.” Only through “negotiation, above all, free from the use or threat of the use of force,” can this be accomplished.