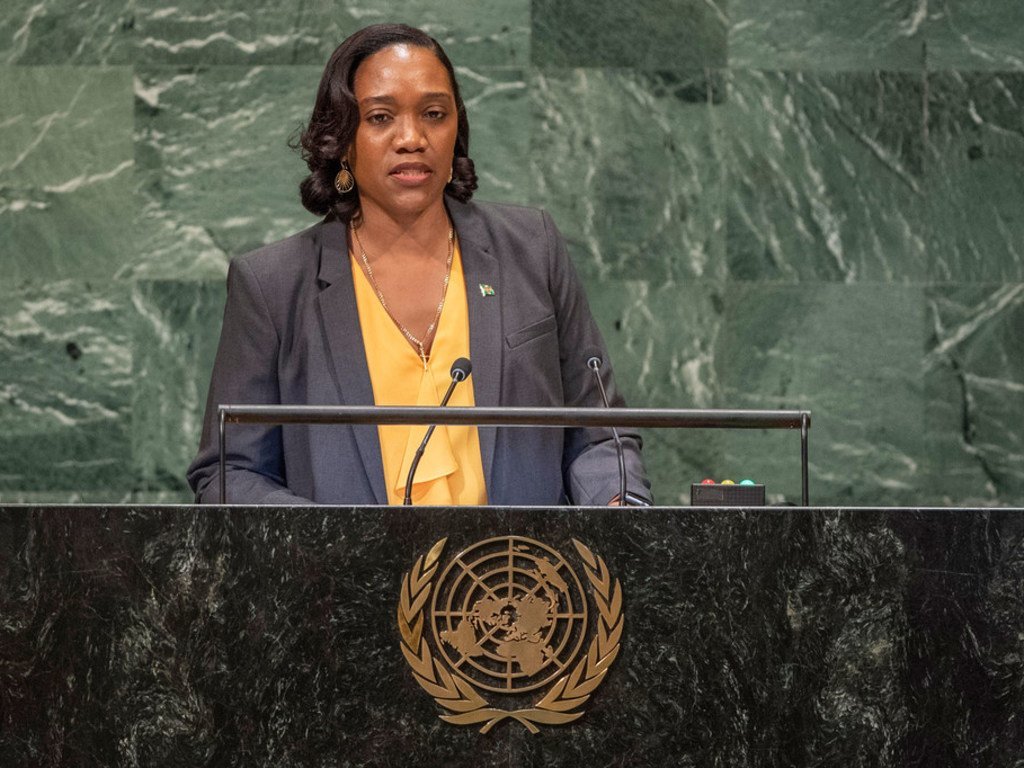 Climate change results from “an economic calculus” that pushes global destruction, Francine Baron, Minister for Foreign Affairs of Dominica told the United Nations Assembly on Saturday, stressing that “it must be accepted as the responsibility of our time.”

Noting that poverty, inequality and violence are also shared responsibilities, she maintained that “their modem-day manifestations are wrapped up in climate change.”

Saying that it arises from activities that support and reflect inequalities, she emphasized that “it is the poor who suffer most.”

“Much violence stems directly from climate-change-induced scarcity of things, like water, or productive lands,” she elaborated, citing climate change as “the main symptom of our world’s broken economy, society and humanity.”

Ms. Baron noted that the global community has neither agreed on an implementation plan for the commitments made in Paris in 2015, nor mobilized the agreed-upon $100 billion annually to assist the most vulnerable in adapting and mitigating against harmful climate change effects.

“While we have failed to live up to these commitments, arctic ice shelves continue to melt at an alarming rate,” she explained. “The oceans continue to get warmer; hurricanes and storms continue to develop and threaten our countries, drought becomes more severe and flooding more pronounced.”

The Foreign Minister warned against perpetual pontification on the subject while punishing rains wreck lives and livelihoods – but urged instead to use our collective efforts to arrest it.

“It is no secret that the lack of motivation by some countries to take the required actions, is rooted in this economic truth: that those who gain most from the activities that create climate change, remain the most removed from its dire consequences,” Ms. Baron underscored.

Last year, she said that Hurricane Maria unleashed 180 miles per-hour winds that brought Dominica to its knees. Immediately afterwards, “our people, raised their battered and wounded selves and began the daunting task of search and rescue, clearing roadways and quickly moved thereafter into a rebuilding mode.”

After international experts completed Dominica’s post-disaster needs assessment, they concluded that in a few hours, a single hurricane “caused loss and damage equivalent to 226 per cent of our country s GDP [gross domestic product],” while “a mere two years prior, a tropical storm, had wiped out the equivalent of 90 per cent” of it.

The cost of building a resilient nation, “comes with a price tag far in excess of what small developing States, like Dominica, are able to meet singlehandedly,” she flagged.

“As I speak to you this minute, dangerous storms are gathering in the western Atlantic,” she said. “As climate change warms the seas and feeds the rainstorms, the risk of future loss and damage grow.”

Arguing that climate change is not “a freak of nature,” but man-made, she encouraged the global leader to let history record what was done, not was said; what efforts were made to globally end climate change and to reduce local vulnerabilities.

“We, together, must grasp this moment,” concluded the Foreign Minister.