On Day four of UN Assembly debate, leaders from vulnerable island States turn out in force to plead for climate action 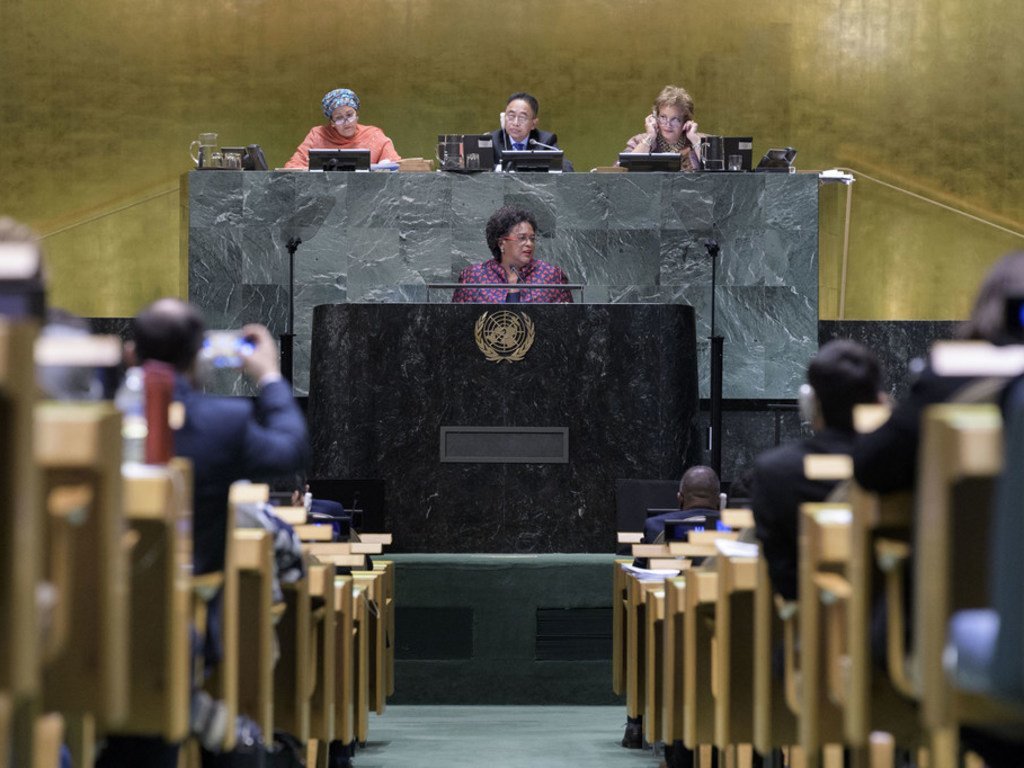 From the Caribbean Sea to the Pacific and Indian Oceans, leaders from island States most threatened by global warming took the podium of the United Nations General Assembly on Friday, the fourth day of its annual general debate, to plead for increased aid to resolve a problem not of their making and call for reform of a financial quirk that punishes them for the progress they make.

Island States have spoken on previous days, but on Friday a total of 10 island leaders took turns explaining to world Heads of State and Government not only the catastrophic impacts of climate change caused by centuries of industrial pollution from northern nations, but the disadvantages they face in the financial domain as soon as they improve the lot of their people.

A jumble of acronyms, but little action

As soon as a country graduates from the status of low income country – or least developed country (LDC) in UN parlance – with an annual per capita gross national income (GNI) below $1,005, to middle-income country (MIC), with a GNI between $1,005 and $12,235, it loses access to concessionary financing, as St. Lucia’s Prime Minister Allen Michael Chastanet explained, noting the acronyms weighing down his Caribbean State.

“I stand before you today as a leader of a small Island developing State – a SIDS, which is also a middle- income country – a MIC,’ he said.

“The world acknowledges our ‘acronyms,’ but little or nothing changes… We continue to struggle under the weight of international frameworks that do not provide an enabling environment for my country to chart an effective sustainable development path, or even to be able to take control of our own destiny.” 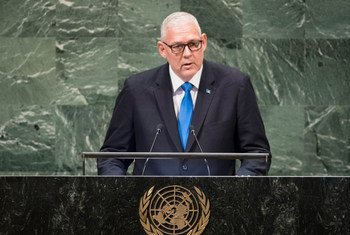 Paris Accord can help turn the tide to fund climate action

From the Pacific island nation of Samoa, Prime Minister Tuilaepa Sailele Malielegaoi, said it was a moral imperative for the world to act decisively and collectively, calling for full implementation of the Paris climate accord that seeks to keep the increase in global average temperature to well below 2 °C above pre-industrial levels.

“Climate change poses the single greatest threat especially to small Island developing states like Samoa, not through our doing or choice,” he said, alluding to the fact those most vulnerable to climate change’s impact are those who contributed least to global warming.

“The Pacific region is already facing the destructive impacts of climate change and disasters – cyclones, floods, droughts. Sea level rise and ocean acidification are taking their toll on the health and the wellbeing of our peoples, environment and economies. Disaster-related economic losses in Pacific island countries as a percentage of gross domestic product (GDP) are higher than almost anywhere else in the world,” he added.

“The United Nations remains our last best hope to provide the political will and the necessary commitment to turn the tide against climate change.” 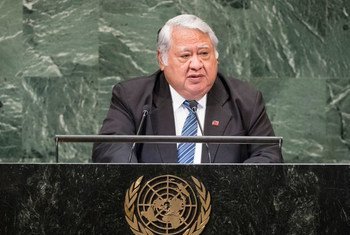 From the Indian Ocean, Prime Minister Pravind Kumar Jugnauth of Mauritius took a global view of the issue.

“As we have seen in California, the Carolinas, the Philippines, China, Europe and elsewhere, the frequency of extreme weather events demonstrates that the impacts of climate change can affect every country on every continent. Hurricanes, floods, droughts, and wildfires are becoming deadlier,” he warned.

“Without a renewed global commitment to undertake ambitious efforts to combat climate change and adapt to its effects we will fail to meet the targets of the Paris Agreement, and endanger our planet as well as our own survival.”

On cue, Tropical Storm Kirk barrels down on the Caribbean

Prime Minister Hubert A. Minnis of the Bahamas highlighted the enormous dangers facing the Caribbean islands, with economies dependent on tourism under dire threat.

“We see this in rising sea levels, the loss of coral reefs, the increased volume of acid in our oceans, and more severe and frequent hurricanes and typhoons,” he said.

“Tourism is the world’s largest industry. It is also the lifeblood of the Bahamian economy. Millions of tourists travel to the Bahamas annually because of our beautiful turquoise waters and biodiversity,” he added, stressing the vital importance of the sustainable use of the world’s seas and oceans free from pollution, especially of plastics.

We see this in rising sea levels, the loss of coral reefs, and more severe and frequent hurricanes and typhoons – Prime Minister Hubert of the Bahamas

For fellow Caribbean leader, Prime Minister Timothy Harris of St. Kitts and Nevis, it was the unfairness of island States paying for the sins of polluters from elsewhere. “Climate change is largely the consequence of actions of more developed countries, their carbon emissions and harmful lifestyles. Yet SIDS pay an unfair price ­– a price so high that, for many of us, climate change presents an existential threat.”

He too criticized the financial quirk that punished middle-income countries for their progress. “We reiterate our calls for the international community to address with urgency the sterile measure of per capita income now employed,” he said.

“The international community cannot on the one hand claim to help SIDS while in the same vein classify us as middle- and high-income countries based on archaic financial models that ultimately deny access to critical developmental assistance and hinder investment financing.”

It was a theme taken up by fellow Caribbean leader, Prime Minister Mia Amor Mottley of Barbados. “Barbados, the Caribbean and other small islands have had to confront the reality that our percentage in trade of goods and services is miniscule, but we are bound by the same rules that apply to those who dominate and can distort global trade,” she said.

“Small States like mine were shepherded out of agriculture and told that services were the route we should use for development. My country, for example, tried financial services pursuant to double taxation treaties, utilizing due diligence, operating a clean jurisdiction that is not a tax haven and complying with Organisation for Economic Co-operation and Development (OECD) requirements.

“Now we are being told our tax practices are harmful and unfair competition to those who still enjoy the bulk of the revenues in global trade and service.”

As if pre-planned to highlight climate change’s devastating effects, Tropical Storm Kirk churned past her country even as she addressed the Assembly, and she left UN Headquarters to return home.

But before she departed, Mrs. Motley, the island nation’s first woman Prime Minister, used the podium to make a fervent appeal for recognition of women’s role in humanity’s progress.

“This United Nations must show leadership in recognizing the talents and contributions of women to human civilization and progress,” she told the Assembly, explain that women have value and give much, whether they labour over smoking wood fires; whether [they] are trapped in poverty because of a lack of opportunity, equality and respect; whether they lead countries; whether they stay at home to care for families; or whether they come to the UN.”

In the exponentially vaster Pacific region, Fijian Prime Minister Josaia Voreqe Bainimarama laid out the human toll. “I meet thousands of Fijian women, men and children every year who have suffered from the latest wave of climate-related impacts; the cyclones, the flooding, the prolonged droughts, and the steadily rising seas, he said.

“I meet with the farmers whose crops have been washed away, the teachers and students who have lost their schools and the families whose homes have been destroyed. They want their Prime Minister to demand that the world take action on their behalf.” 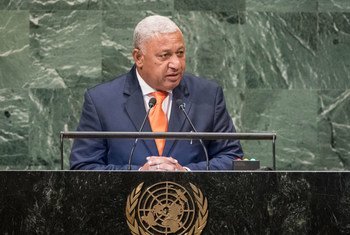 Fellow Pacific Islander, Prime Minister Charlot Salwai Tabimasmas of Vanuatu demanded that the industrial world step up to plate with the aid they pledged for climate mitigation. “The Governments of the industrialized countries promised to release $100 billion a year in climate funds for vulnerable countries by 2020,” he said.

“We demand that the highest priority be accorded to these pledges and a concrete road plan to mobilize and constitute the promised funds be put in place in the shortest possible time, because climate change is raging fiercely.”

Though their focus was on the potential climatic catastrophe looming over them, this is not to say that the island speakers ignored other world crises including conflict, security and development that figured in the speeches of scores of other world leaders who mounted the podium on day four. 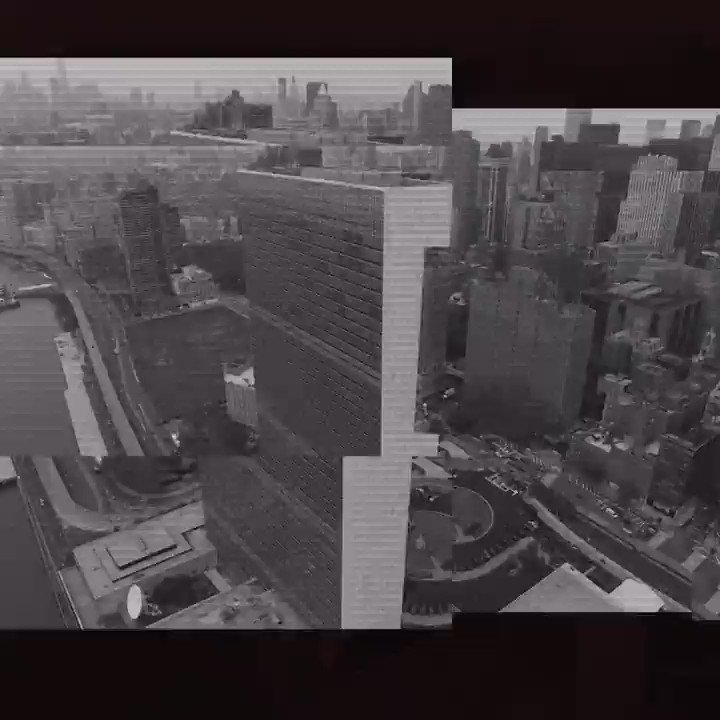