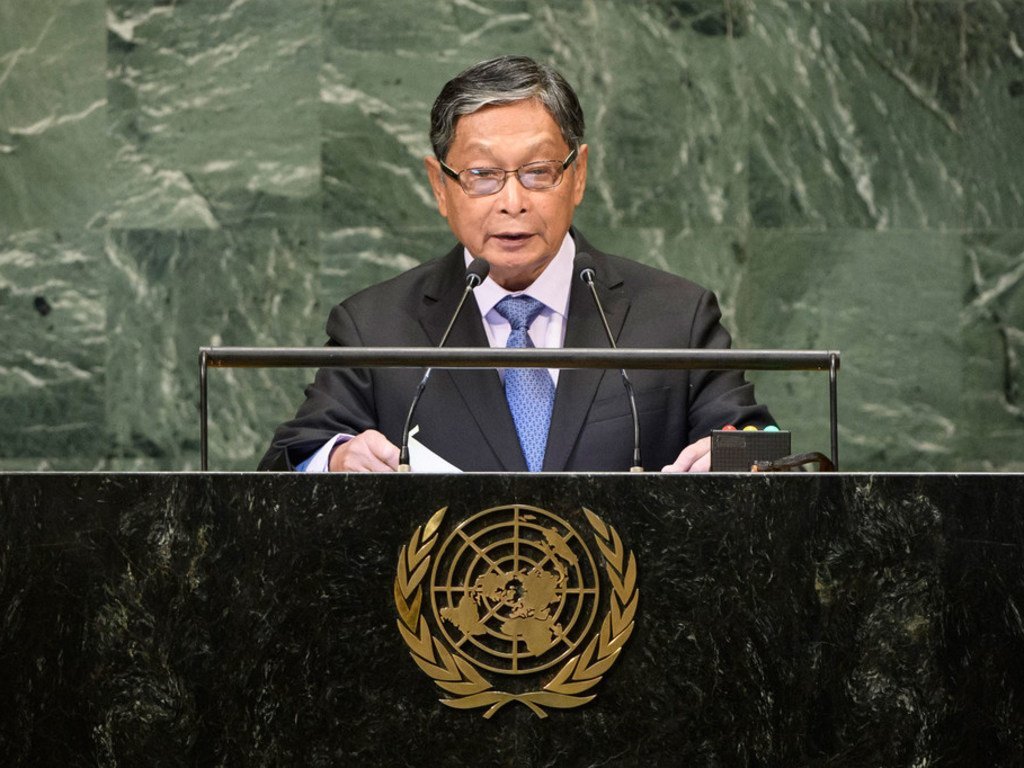 UN Photo/Loey Felipe
Kyaw Tint Swe, Union Minister for the Office of the State Counsellor of the Republic of the Union of Myanmar, addresses the seventy-third session of the United Nations General Assembly.
28 September 2018
Peace and Security

Addressing the United Nations General Assembly’s annual debate, a minister from Myanmar “resolutely rejected” an International Criminal Court (ICC) ruling in connection with the country’s restive Rakhine state, underscoring that the tribunal has “no jurisdiction over Myanmar whatsoever.”

“The ICC decision was made on dubious legal grounds and applied to a situation where domestic remedies have not yet been exhausted,” said Kyaw Tint Swe, Union Minister for the Office of the State Counsellor, Daw Aung San Suu Kyi.

“Such action can only erode the moral and legal authority of the Court,” he said, noting that his country is “committed to ensuring accountability where there is evidence of human rights violations committed in Rakhine state.”

In his address, the Minister also voiced “serious concerns” over a report by the UN Human Rights Council Independent International Fact-Finding Mission on Myanmar, noting his Government’s objection to the Mission’s establishment, composition, and mandate.

“At a time when we are working hard to build harmony on the ground, we are concerned that the release of this report based on narratives and not on hard evidence will only serve to inflame tensions further and potentially hinder our efforts to create the much-needed social cohesion in Rakhine state.”

In its report, published on 27 August, the Fact-Finding Mission found patterns of gross human rights violations and abuses committed in Kachin, Rakhine and Shan states that “undoubtedly amount to the gravest crimes under international law”, principally by Myanmar’s military, the Tatmadaw, but also by other security forces. It documented mass killings, the scorching of Rohingya settlements and large-scale gang rape and other sexual violence by Tatmadaw soldiers.

Minister Tint Swe went on to stress that accountability “must apply equally to all” and that “individuals, organizations, national governments, as well as multilateral organizations, must be held responsible for the consequences of their words and actions.”

Further in his address, the Minister informed the General Assembly of the recent establishment of an Independent Commission of Enquiry, which will investigate all violations of human rights and atrocities committed in Rakhine state “as part of our efforts to address the issues of accountability, reconciliation, peace, stability, and development in our country.”

“We hope that, alongside the Rakhine Advisory Commission’s recommendations, the work of the Independent Commission of Enquiry will become an important guiding light for the resolution of long out reached problems in the Rakhine state.”

He also noted that resolving the issue in Rakhine state is an important component of Myanmar’s democratic process, noting that the Government of Myanmar sympathizes “deeply with the displaced persons especially women and children” and that it has steps for the early repatriation of all displaced persons from Rakhine, who are verified as residents of the state.

Recalling the bilateral agreements signed with Bangladesh concerning returns, the Minister called on the country to fulfil its commitments in accordance those agreements “to allow, without delay the return of verified persons under voluntary, safe and dignified conditions.” Implementation of the bilateral agreements is the only way to resolve the issue swiftly and peacefully, he added.

Also in his address, Minister Tint Swe spoke about his Government’s efforts to transform Myanmar into a democratic nation; bring about sustainable development; and build a society where stability, peace, and harmony prevail.