UNAMID/Mohamad Almahady
Some 63,000 displaced people have sought refuge in a safe zone adjacent to a UNAMID facility in Sortoni in Darfur, Sudan. (file April 2016)
28 September 2018
Peace and Security

Stating that while the Darfur region of Sudan, which for years was torn by strife and displacement, is now increasingly stable, top United Nations officials on Friday urged continued international support to ensure that hard-won gains take hold.

“This is not the time to disengage,” Deputy Secretary-General Amina Mohammed told participants at the high-level meeting on Darfur, held on the margins of the General Assembly’s annual general debate.

“We have invested $16 billion in peacekeeping alone over the past ten years, in addition to humanitarian funding and bilateral aid to alleviate the suffering of the population. As the region recovers from war, now is the time to consolidate gains,” she said, adding that it was time to “step up and make sure Darfur moves towards peace and prosperity.”

A civil war which broke out in 2003, led to the deaths of tens of thousands of Darfuris and the displacement of nearly two million. In the fighting between Sudanese Government troops and militias and other armed rebel groups, widespread atrocities such as murder and rape of civilians were committed.

Ms. Mohammed noted that today’s Darfur “looks very different” from the Darfur of ten years ago when the African Union and the UN deployed their joint peacekeeping mission, known as UNAMID, to help bring stability to the region.

“In the Darfur of today, we see intermittent clashes in the mountains of the Jebel Marra, but violent conflict has subsided. Outside of that zone, fighting has largely ended, and intercommunal clashes have been considerably reduced,” she stated.

“This is a significant achievement and a clear expression that our goal of silencing the guns in Africa can be a reality.”

In July, the UN Security Council extended UNAMID’s mandate until the end of June next year, but reduced the number of troops deployed in the field with an eye towards the mission’s eventual exit.

At today’s meeting, the Deputy Secretary-General proposed the creation of a “Group of Friends of the Transition in Darfur” to provide political support and ensure the UN Country Team has sufficient resources during this period. It was also proposed to have a pledging conference in the near future to ensure that the UN system can “ramp up” its work and avoid any gap in critical work as UNAMID draws down.

Echoing these sentiments, Under-Secretary-General for Peacekeeping Operations Jean-Pierre Lacroix told reporters after the meeting that today was an important occasion to express support for the transition from an international support based on peacekeeping to one focused on peacebuilding.

Eldirdiri Mohamed Ahmed, Minister for Foreign Affairs of Sudan, said the withdrawal of peacekeeping troops means that his Government will now be entrusted with the primary responsibility of ensuring that security and peace prevails in Darfur. In this regard, he said Sudan is appealing to the international community to help Sudan undertake this responsibility by lifting the sanctions placed on it.

“Sanctions were mostly imposed on Sudan because of what has taken place in Darfur. We believe it is now timely to lift the sanctions so that Sudan can undertake its responsibilities in their entirety,” he told reporters at the UN.

♦ Receive daily updates directly in your inbox - Subscribe here to a topic.
♦ Download the UN News app for your iOS or Android devices.
Darfur|peacekeeping 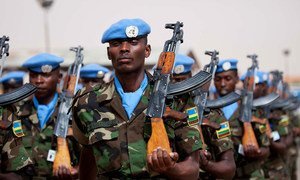 The Security Council on Friday extended the mandate of the joint United Nations-African Union peacekeeping operation in Sudan’s Darfur until the end of June next year, but reduced the number of troops deployed in the field with an eye towards the mission’s eventual exit.