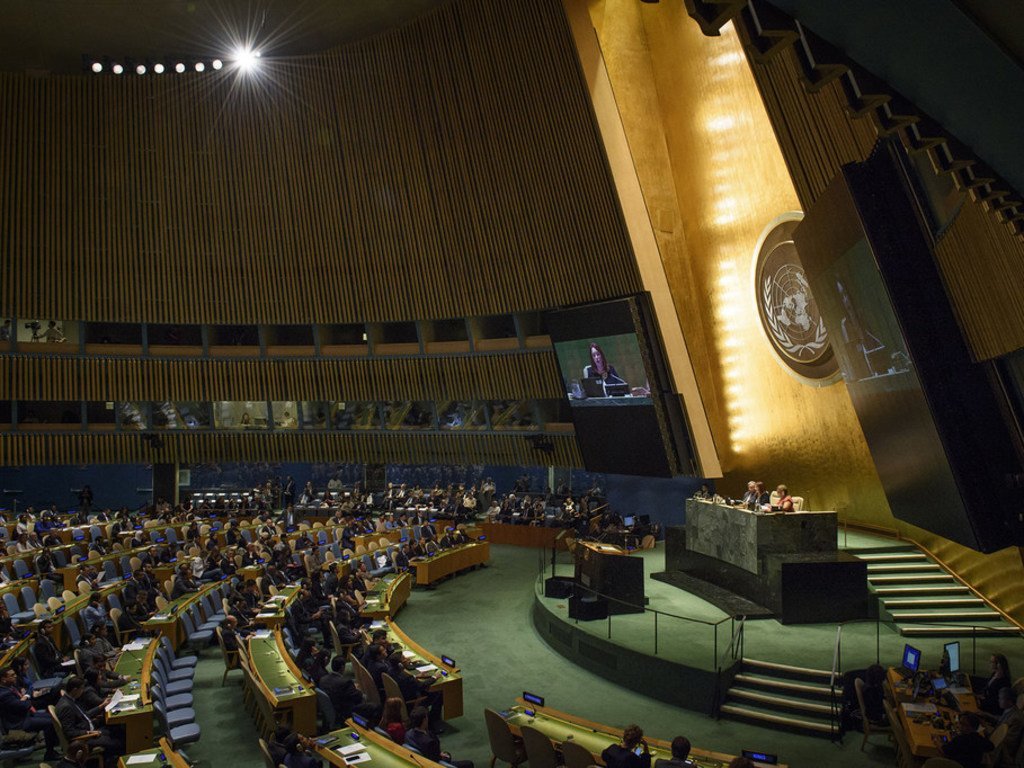 UN Photo/Loey Felipe
Wide view of the General Assembly Hall at the opening of its seventy-third session, on 18 September 2018.
27 September 2018
Peace and Security

More common themes, such as multilateralism and climate change, dominated the debate’s first two days, but on Thursday, the very raison d'être of the UN’s founding in 1945 – the prevention of war – played out from the same podium in the same hall before assembled world Heads of State and Government, though neither of the two protagonists attended the other’s speech.

Within a couple of hours of each other, Israeli Prime Minister Benjamin Netanyahu and Palestinian President Mahmoud Abbas propounded opposing narratives on indigenous origins, the holy city of Jerusalem and the very nature of a Jewish State, which have divided two peoples claiming the same strip of land as their nation’s homes, putting in high relief the monumental problems that the UN faces here and in other peace mediation efforts across the world.

Many leaders who have spoken so far during the debate, which began on Tuesday, have made passing reference to the Middle East conflict, generally declaring their support for the UN-backed two-state solution, with Israel ending its occupation of Palestinian territories and both States living side by side in peace and security within recognized borders.

But on Thursday the Assembly witnessed the very heart of the problem, straight from the leaders themselves, in all its detailed complexity, devoid of the generalities that have been the rule so far.

President Abbas said of the Palestinians: “We are an indigenous people and our roots are deep across five thousand years.”

Mr. Netanyahu declared: “Ever since Abraham and Sarah made their journey to the Promised Land nearly 4,000 years ago, the Land of Israel has been our homeland. It’s the place where Isaac and Rebecca, Jacob, Leah and Rachel carried on their eternal covenant with God.”

“[This is] a racist law that crossed all the red lines,” he said. “This law denies the connection of the Palestinian people to their historic homeland and dismisses their right to self-determination and their history and heritage,” he added, warning that it will inevitably lead to the creation of one racist State, an apartheid state, and nullifies the two-state solution.

Mr. Netanyahu, who had the good fortune to be scheduled to speak second, took this up directly. “Moments ago, President Abbas outrageously said that Israel’s Nation State Law proves that Israel is a racist, apartheid state,” he said.

“President Abbas, you should know better. You wrote a dissertation denying the Holocaust. Your Palestinian Authority imposes death sentences on Palestinians for selling land to Jews. Did you hear that? If a Jew buys an apartment, a piece of land anywhere in the Palestinian territories, the Palestinian who sold him that land is executed. That’s what the law says,” he added, pointing to what he saw as racism on the other side.

So there it was – both sides live.

The UN has been focused on the Middle East conflict ever since 1947 when the General Assembly voted for the partition of Palestine, then under British mandate, into Jewish and Arab homelands.

Seventy-one years and four full-scale wars later, after countless Security Council resolutions, UN speeches, and tit-for-tat condemnations from the two sides, it’s almost as if the conflict is back at square one, at least listening to the two leaders.

And yet, again today President Abbas today reaffirmed his commitment to peace and the two-state solution and the path of negotiations to achieve them.

And Prime Minister Netanyahu said Israel hoped the day would soon arrive when Israel “will be able to expand peace, a formal peace, beyond Egypt and Jordan to other Arab neighbors, including the Palestinians.”

Beyond that, a full roster of leaders mounted the Assembly’s podium on the debate’s third day, with calls for multilateralism, action against climate change and momentum to attain the ambitious Agenda 2030 of Sustainable Development Goals (SDGs) that seek to eliminate a host of social ill, including full access to proper nutrition and health for all, by 2030.

As for the Middle East conflict, it barely even figured in the third day’s speeches, even with the rote two-state reference. One of the few to allude to it was President Nicos Anastasiades of Mediterranean island neighbour Cyprus – with as single phrase.

“Bearing in mind the ongoing unstable situation and conflicts in Syria, Iraq, Yemen, Libya, Nigeria, Myanmar, Afghanistan, the Sahel, the long-standing Israeli-Palestinian conflict and, of course, the still unresolved problem of the forcible division of my country, we should attach particular importance to the peace and security pillar reform,” he said.