UN Photo/Loey Felipe
The UN Security Council debates the issue of nuclear non-proliferation in the Democratic People's Republic of Korea.

If the leadership of North Korea follows a diplomatic path to end its nuclear weapons programme, then a “much brighter future lies ahead” for its people, the US Secretary of State told the Security Council on Thursday.

Saying that the world was at the “dawn of a new day” over the Peninsula, Mr. Pompeo said “the Korean people, the region, and the world, will never realize the full promise of the future, if we do not seize this unprecedented diplomatic opening for peace.”

He said that North Korea leader Kim Jong-un, and President Donald Trump – following their historic summit in Singapore – “share a common, personal understanding of what must take place” to transform relations between the two countries, adding that he’d had a “positive meeting” with his DPRK counterpart on Wednesday, and work was well underway for a second leaders’ summit. 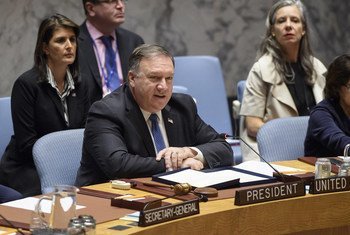 But on the implementation of Security Council resolutions which include punitive economic sanctions against North Korea, he said the US had evidence that a cap on petroleum imports to DPRK, had been “breached”, and illegal coal imports were continuing. He claimed that some members of the Security Council had been complicit with breaking an embargo on hosting North Korean labourers, in violation of sanctions.

China’s Foreign Minister, Wang Yi, told the Council that his country welcomed the diplomatic efforts by the US and the Republic of Korea, or South Korea, towards denuclearization and lasting peace. He said that an “end of war” declaration to officially cease hostilities from the Korean War, would help build trust, and he called for six-party multilateral talks to continue.

On sanctions, he said that it was equally important to advance the political process. He said that the Council should consider allowing a relaxation of some economic sanctions, if North Korea was in compliance: “Given the positive developments…China believes that the Security Council needs to consider invoking in due course, this provision to encourage DPRK and other relevant parties, to move denuclearization further ahead.”

The foreign ministers of both South Korea, and Japan, were invited to brief the Council, in addition to the 15 members. For the Republic of Korea, Kang Kyung-wha, said the Council had played “a critical role” in adopting sanctions, to pressure DPRK to the negotiating table.

“In the last few months, it has taken a series of ‘for the first time’ actions, that were unthinkable, only a year ago,” she said. “We are committed to continuing to work with the international community, to ensure that the Council’s sanctions are faithfully implemented, even as we continue to engage North Korea, to facilitate substantial progress towards complete denuclearization.”

Japan’s foreign minister, Taro Kono, said international unity was “critical” and agreed with the US that the petroleum sanctions cap on imports, had been breached. “It is important that all Member States immediately stop supplying these products to North Korea”, he said.

He said that together with reports of other sophisticated attempts to evade sanctions, using ship-to-ship transfers and the selling of fishing rights, it meant that “the very authority of the decisions made by this Council, is at stake.” 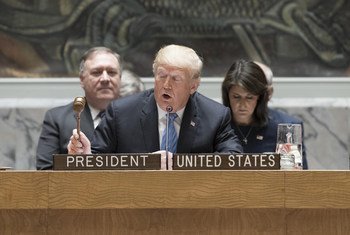 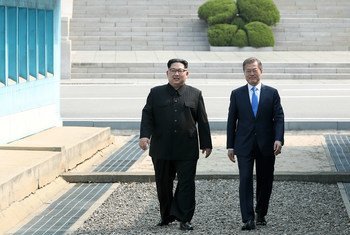 The United Nations Secretary-General António Guterres, on Thursday welcomed the outcome of the third inter-Korean summit this year, and the “important agreements” contained in the Pyongyang Joint Declaration, issued by the leaders of the two Koreas.