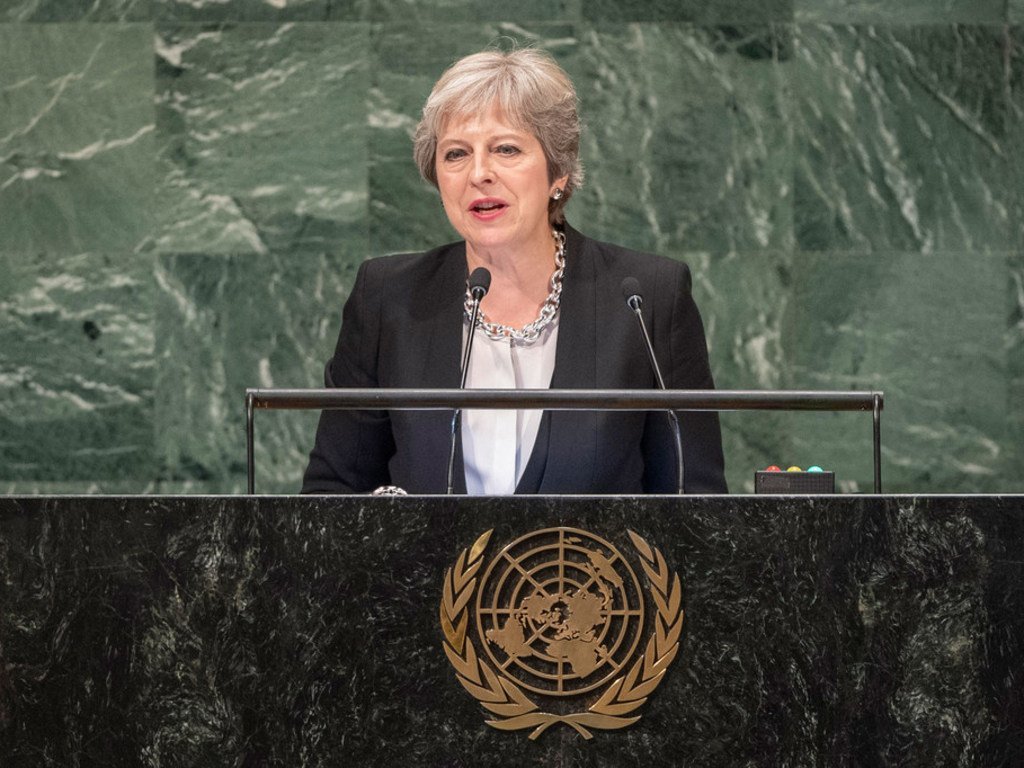 United Kingdom Prime Minister Theresa May warned world leaders at the United Nations on Wednesday that only global cooperation can tackle global challenges such as climate change and unequal economic growth, avoiding the pitfalls of totalitarianism, war, and intolerance that marked the last century.

“We have to show there is a better way to meet the concerns of our people. That way lies in global cooperation between strong and accountable states based on open economies and inclusive societies,” she told Heads of State and Government on the second day of the UN General Assembly’s annual general debate.

Highlighting the dangers of authoritarianism and the warping of natural patriotism into aggressive nationalism, she lambasted Russia.

“We see this when States like Russia flagrantly breach international norms – from the seizing of sovereign territory to the reckless use of chemical weapons on the streets of Britain,” she said, referring to Russia’s annexation of Crimea and intervention in eastern Ukraine, and the Novichok nerve agent attack on a former Russian intelligence officer and his daughter in the English town of Salisbury.

In a speech in which she used the world global 15 times and cooperation seven, Mrs. May stressed that cooperation and competition are not mutually exclusive. “Only global cooperation based on a set of agreed rules can ensure competition is fair and does not succumb to protectionism, with its certain path to lost jobs and international confrontation,” she said.

“We see this cooperation here today at this UN,” she added, laying out three main pillars to advance fair globalization.

“We must recognize the legitimacy of people’s concerns and act to build a global economy that works for everyone. We must invest in the patient work of building open societies in which everyone has a stake in the future. And we must act to uphold the international rules-based system – and stand up for our values by protecting those who may suffer when it is violated,” she said.

On the first, she noted that the pace of globalization has left too many people behind, and she called for investing in industries of the future to create new jobs from low carbon technologies to Artificial Intelligence, and providing the education these require.

Secondly, she stressed the need to build countries, not only economies, which work for everyone with inclusive societies where every citizen has a stake in the future, where transparency and accountability are paramount with an independent judiciary, free and fair elections, and a free and open media.

Mrs. May said the UK vote to leave the European Union (EU) was not a rejection of multilateralism or international cooperation, but a clear demand for decisions and accountability to lie closer to home.

On the third issue of an international rules-based system, she stressed the “moral imperative” of reacting forcefully to any violations.

“When barbarous acts and aggression go unchecked – dictators and terrorists are emboldened. So, we must have the confidence to act,” she declared, citing the military action taken by the UK, France and the United States when the Syrian regime used chemical weapons on its people in April, and the expulsion by the UK, the North Atlantic Treaty Organization (NATO), the EU and other allies of over 150 Russian intelligence officers in response to the Salisbury attack.

In Myanmar, after the damning report of the UN fact-finding mission on the appalling atrocities repeatedly inflicted by the “Burmese military” on the Rohingya, Shan and Kachin peoples since 2011, “we should show the same confidence to hold accountable those responsible,” she said.

“But accountability alone is not enough. We must do more collectively to prevent such atrocities in the first place, and address the causes of instability that can give rise to them. The United Nations has a critical role to play.”