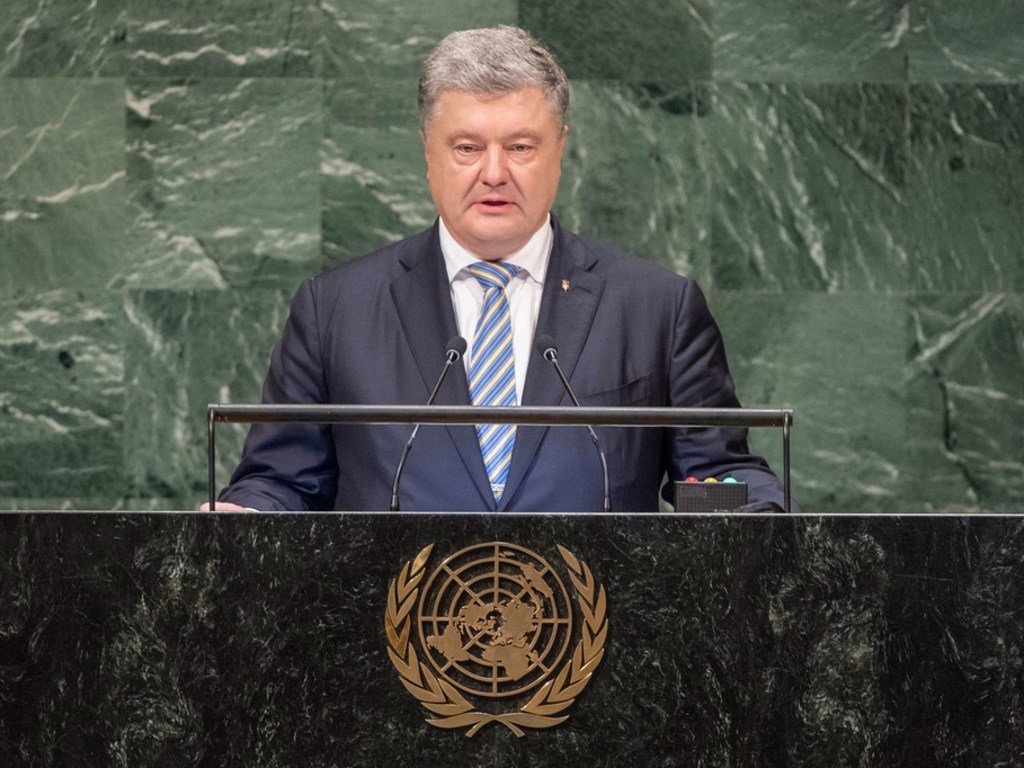 Devoting most of his speech before the United Nations General Assembly to castigating Russia for what he said was its “2014 annexation of Crimea” and backing separatists fighting in the Ukraine’s east, Petro Poroshenko, President of Ukraine, said that only international action will stop Moscow’s “aggressive expansionist policies.”

“As I deliver my speech, reports have brought sad news of another human life just lost on the frontlines of the war inflicted upon my country by a permanent member of the UN Security Council.” he said on Wednesday,

“This has been a daily reality for Ukrainians for four years now,” he continued. “Thousands of deaths, destruction, displacement and human suffering,” which has tested Ukraine’s determination, solidarity, resilience and faith.

The Head of State observed that under Russian occupation, “Crimea has turned into a military stronghold threatening security and stability in the entire wider Black Sea region,” saying that the increasing militarization of Crimea deserves the Assembly's attention and “prompt reaction."

He underscored that Russia is punishes Ukraine for making a sovereign decision to live in a free world based on democratic values.

“The UN shall not be silent when the values and principles rooted in its Charter and the entire body of international law are being violated by a veto country,” he argued, calling UN action “not just a challenge,” but a chance to make the Organization relevant.

According Mr. Poroshenko, international developments over the last decade have “seriously undermined” respect for peace and international law and staying silent when international norms are breached encouraged continued destructive policies.

“Let me be clear on this point,” he told the Assembly, “nothing will stop Moscow from continuing its aggressive expansionist policies if it does not face a united stand of the international community.”

He noted that while the Security Council has discussed the situation in Ukraine, Russia has veto power to block any action against it.

Mr. Poroshenko sought Security Council reform as “an important contribution to the ongoing UN-wide change,” saying “the abuse of the veto right is a brake that often does not allow our Organization to really act.”