UN Photo/Marco Dormino
A woman and her child in the IDP village near Mopti. The village is located on the outskirts of town and hosts around forty families, most of whom fled the Timbuktu region.
26 September 2018
Peace and Security

A few weeks after the presidential vote in Mali, which saw the re-election of President Ibrahim Boubacar Keïta, the full implementation of the 2015 Agreement for Peace and Reconciliation has been hampered by persistent delays and frequently renegotiated timelines.

“It is time for all parties to honour their obligations,” said UN Secretary-General António Guterres, who visited Mali in May, and described seeing a “spirit of hope and possibility,” amid all the challenges.

“The people of Mali must see the tangible dividends of peace,” he stated.

Conflict in northern Mali started in 2012, with a sharp intensification of hostilities across the country in 2018, leading to a worsening of the humanitarian situation. The UN Stabilization Mission in Mali, MINUSMA, has become the most dangerous place in the world to serve as a ‘blue helmet’.

According to the UN Office for Coordination of Humanitarian Affairs (OCHA), about 5.2 million people – one in four Malians – are now estimated to be in dire need of assistance. After commending the efforts made by the Sahel States, the African Union Commission, and other partners to help achieve peace and development in the region through the UNSS, the UN chief appealed “to all international partners, including the International Financial Institutions and the business community, to step up.”

“Now is the time for collective action. By doing so, we can help build the sustainable, inclusive, secure future that the people of Mali and the Sahel deserve,” he concluded.

Watch our audio slideshow on Mali and the importance of the UN’s work there, below:

♦ Receive daily updates directly in your inbox - Subscribe here to a topic.
♦ Download the UN News app for your iOS or Android devices.
mali|General Debate 73 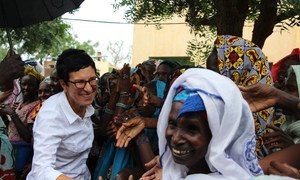 A senior United Nations relief official has called for greater international attention to the plight of millions in Africa’s Mali, where worsening intercommunal violence and armed group attacks are complicating an already complex humanitarian emergency. 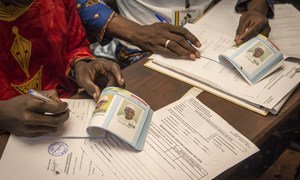 The members of the Security Council on Friday welcomed the publication of the final results of the presidential polls in Mali, which saw the re-election of President Ibrahim Boubacar Keïta, and insisted on the urgent need to accelerate the implementation of the peace agreement.