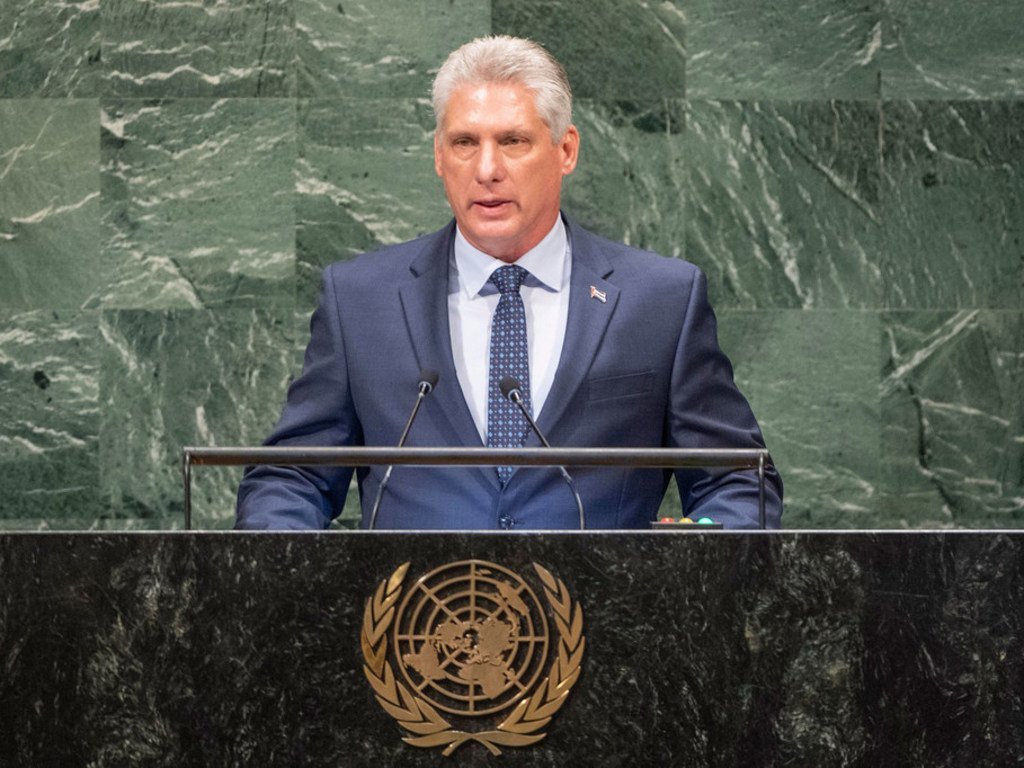 UN Photo/Cia Pak
Miguel Díaz-Canel Bermúdez, President of the Council of State and Ministers of the Republic of Cuba, addresses the seventy-third session of the United Nations General Assembly.
26 September 2018
Economic Development

The consequences of capitalism, imperialism and neoliberalism are not only manifesting in fascism and conflicts around the globe, they are also diverting much needed resources which could have helped implement the 2030 Agenda for Sustainable Development or address climate change impacts, the Cuban President told world leaders at the United Nations General Assembly.

Addressing the Assembly’s annual general debate, President Miguel Díaz-Canel Bermúdez criticized the United States – “one of the major polluters of yesteryear and today” – for “refusing to accompany the international community in the implementation of the Paris Agreement.”

“It thus endangers the lives of future generations and the survival of all species, including humans,” he stated.

The Cuban leader also noted increasing closer historic and cultural bonds between the people of Cuba and the US, as well as the potential of business relations between the two countries, as being in the best interest of the entire region.

However, he noted that “the essential and defining element” of the relationship between the two continues to be the blockade, “which seeks to suffocate the Cuban economy [and] is a cruel policy, punishing Cuban families and the entire nation.”

The Cuban leader also reiterated his country’s “unrestricted support” to a just, comprehensive and lasting solution to the Israeli-Palestinian conflict, on the basis of the two-state solution.

President Miguel also expressed support for a peaceful and negotiated solution to Syrian crisis, without foreign interference and with full respect to their sovereignty and territorial integrity; welcomed the process rapprochement on the Korean Peninsula; and “demand compliance” with the Iran nuclear deal.

The Cuban President informed world leaders of steps his country is taking to improve its socio-economic development model and that it has begun a constitutional reform process, through “a truly participatory and democratic exercise, through popular discussion of the draft which will eventually be approved in a referendum.”