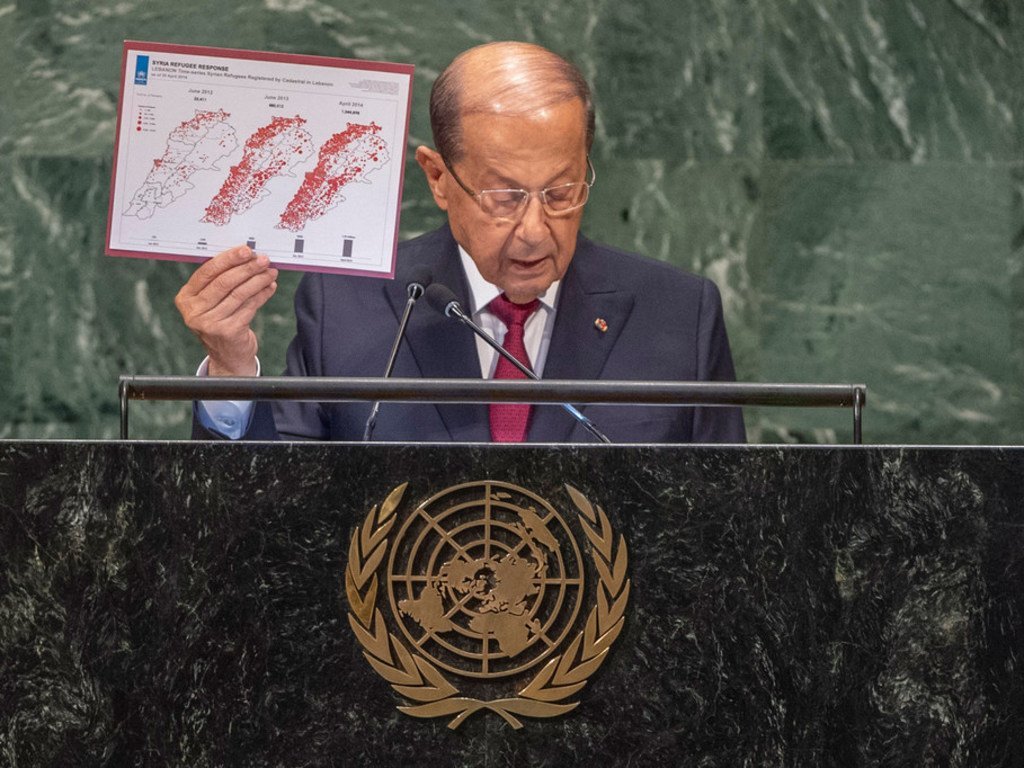 Although Lebanon ‘is groping our way to rise from consecutive crises’, President Michel Aoun said on Wednesday that his country was being buffeted by regional crises and called on the United Nations to show global leadership by taking action to resolve conflicts in the Middle East.

Arguing strongly in favour of reforming the UN Security Council, he said that the 15-member body has “failed to adopt fair, and sometimes defining resolutions” leading to the suffering at “the very heart of our region.”

As one example, he drew attention to resolution 425 (1978) in which the Council called on Israel to withdraw forces from its territories, saying that 22 years later, due to Lebanese resistance, it was finally implemented.

“There must be a reform project that sets out the enlargement of the Security Council, the increase of the number of Member States and the adoption of a more transparent, more democratic and more balanced system,” he underscored.

“It is of the paramount importance for the General Assembly to express better the effective orientation of the international community,” he added.

The President pointed out that although Lebanon has risen from consecutives internal crises, the consequences of neighouring countries “still weigh heavily upon us.”

Holding up before the Assembly a map provided by the UN refugee agency, he said that there are waves of displaced people “fleeing the hell of war” in Syria pouring into Lebanon, and that while his country has tried to the greatest extent possible to ensure them a dignified and descent life.

Nevertheless, he noted that crime rates have jumped by 30 per cent, unemployment has dropped by 21 per cent and the density of the population has increased from 400 to 600 people per square kilometer, “making it impossible for us to keep shouldering this burden, especially that most of the Syrian territories have become safe.”

“Against this background, I reiterate the stance of my country which seeks to consolidate the right of dignified, safe and sustainable return of the displaced to their land, rejecting absolutely any project of settlement, whether for the displaced or the refugee,” he asserted.

Mr. Aoun then voiced his dissent of “the international political approaches for the Middle East,” which “lack justice and use double standards,” calling Palestine “the best reflection of this picture.”

He cited the Council and Assembly’s vote against the proclamation of Jerusalem as the capital of Israel, yet, he said, “despite the results of the two votes, which reflected the will of the international community, some embassies were transferred to it” – undermining “the endeavours of peace and the two-state project.”

Observing that the world today suffers from extremism and fanaticism, Lebanon’s Head of State highlighted a pressing need for dialogue between religions, cultures and races, and for building international cultural institutions to spread a dialogue of peace.

“The road to salvation resides in convergence, dialogue, the rejection of the language of violence, the establishment of justice between the people, and it is the only path that brings back stability and security to our societies, and achieves the sustainable development that we aspire to,” concluded President Aoun.

♦ Receive daily updates directly in your inbox - Subscribe here to a topic.
♦ Download the UN News app for your iOS or Android devices.
Lebanon|General Debate 73