CTBTO
The aftermath of a nuclear test, carried out in Licorne in French Polynesia in 1971.
26 September 2018
Peace and Security

The time has come to make tangible progress to rid the world of nuclear weapons, top United Nations officials stressed today, citing the grave threat posed by such weapons to global security.

“The only sure way to eliminate the threat posed by nuclear weapons is to eliminate the weapons themselves," Secretary-General António Guterres said at a high-level meeting of the General Assembly to commemorate and promote the International Day for the Total Elimination of Nuclear Weapons.

“Such a challenging goal will not be achieved overnight. But we must take urgent steps now.”

In May of this year, the Secretary-General launched his disarmament agenda, which recognizes that progress towards the shared goal of a world free of nuclear weapons remains uneven. He noted that efforts have stalled and, in some cases, may be going backwards.

“That is why I have called for the resumption of sincere, substantive and results-oriented dialogue towards the total elimination of nuclear weapons, as well as the implementation of existing commitments,” he said, adding that States possessing nuclear weapons have a responsibility to lead.

He appealed to the United States and Russia – “by far the largest possessors of nuclear weapons” – to re-engage in the dialogue necessary to maintain their historic track record of bilateral arsenal reductions.

At the same time, the Secretary-General stressed that all States have responsibilities in the pursuit of nuclear disarmament, primarily the fulfilment of their non-proliferation obligations.

“No other technology, no other weapon of mass destruction, has the capacity to, quite literally, change the face of the earth, eradicating entire societies.”

In terms of progress, she noted the adoption in 2017 of the Treaty on the Prohibition of Nuclear Weapons – an historic, legally-binding instrument for nuclear disarmament that includes prohibitions against developing, testing, acquiring, using or even threatening to use, nuclear weapons.

“The Treaty is a testament to the continued need for, and utility of, multilateralism,” she stated.

The International Day for the Total Elimination of Nuclear Weapons, marked annually on 26 September, provides an occasion for the world community to reaffirm its commitment to global nuclear disarmament as a high priority. It also provides an opportunity to educate the public about the real benefits of eliminating such weapons, and the social and economic costs of perpetuating them.

♦ Receive daily updates directly in your inbox - Subscribe here to a topic.
♦ Download the UN News app for your iOS or Android devices.
nuclear weapons|General Debate 73 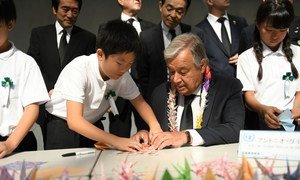