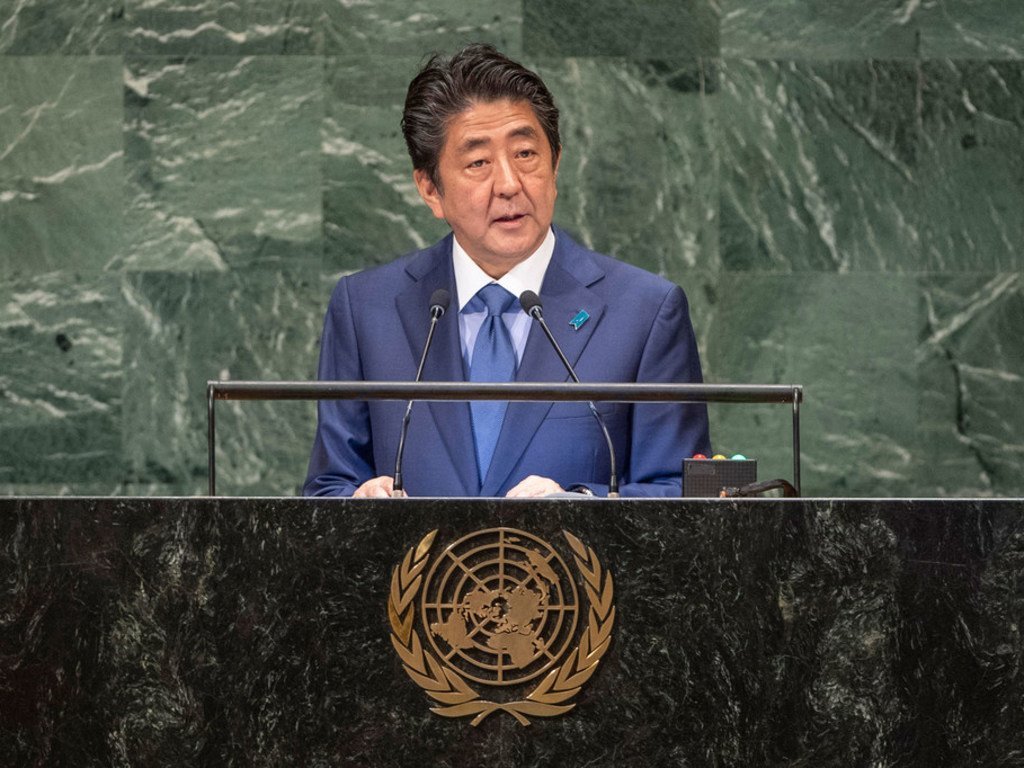 “Other than coal that supported modern Japan’s industrialization, our nation has had no other resources to speak of. But upon devoting itself to reaping the blessings of trade, post-war Japan succeeded in realizing growth that was called a miracle, even though it lacked resources,” said Prime Minister Abe.

“The very first country to prove through its own experience the principle that exists between trade and growth – a principle that has now become common sense – was Japan.”

Alongside the Comprehensive and Progressive Agreement for Trans-Pacific Partnership (TPP11), Japan-European Union partnership agreement and the country’s commitment to the World Trade Organization, Mr. Abe expressed his full support towards negotiations on the proposed free trade agreement “RCEP” in east Asia.

In his address, Prime Minister Abe also emphasized that he will “do everything” in his power to clear the long-standing post-war structure from north-east Asia; and resolve territorial issue with Russia and conclude a peace treaty between the two countries.

Recalling his call on the Democratic People’s Republic of Korea (DPRK), made at the general debate last year, to resolve its abductions, nuclear, and missile issues, the Japanese leader said that DPRK now stands at a crossroads, from which “it will either seize, or fail to seize, the historic opportunity it was afforded.”

Mr. Abe also spoke of advanced capacity building activities in maritime policy, offered by Japan for students from other Asian countries, where they are imparted with necessary skills and principles to protect and defend a free and open Indo-Pacific region.

He also spoke of a new training programme, starting at the beginning of 2019, for elementary and junior high school teachers from the Gaza Strip, which would allow them to put the situation in Gaza and the Middle East into a wider perspective and work as a solace to them.

Next-generation Japanese youth will work commendably as flag bearers for the ‘UN spirit’. I am absolutely certain of that.

“It goes without saying that for peace, efforts must be made on both sides. But hopefully this program of ours will impart a means of hope to the teachers from Gaza and the children in their care,” added Prime Minister Abe.

Looking ahead, Mr. Abe expressed hope that future generations will successfully be able to take on challenges they will face, noting that “the duty of our generation is to create an environment that facilitates this.”

Mr. Abe also informed world leaders of major upcoming events in his country, including the abdication by the Emperor of Japan and the accession of the Crown Price to the imperial throne, the Japan’s presidency of the G20, and the country’s hosting of the 2020 Olympics and Paralympic Games.

In conclusion, the Japanese Prime Minister highlighted a pressing need for reforming the Security Council. He also announced that Japan, together with Secretary-General António Guterres will push forward with the reform of the Council as well as the reform of the United Nations.