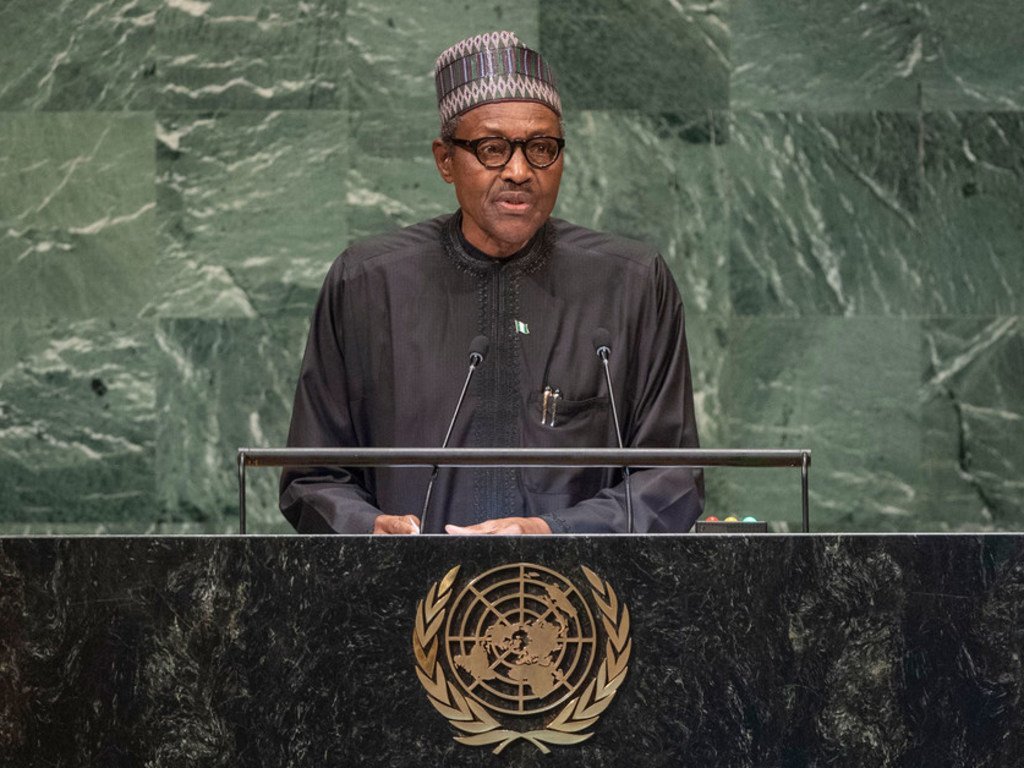 A variety of “festering” causes and effects surround crises around the world, Nigeria’s President, Muhammadu Buhari, said on Tuesday, speaking on the first day of the high-level portion of the United Nations General Assembly’s annual general debate.

“Most crises usually have a variety of festering causes and effects,” he explained.

“It is the failure to address them early and effectively that lead to out-of-control conflicts,” he argued, noting that solutions include collective national and international actions.

Speaking about the fight against international and local terrorism, “Boko Haram and Al Shabaab come to mind.”

“Terrorist insurgencies, particularly in the Sahel and the Lake Chad Basin, are partly fueled by local factors and dynamics, but have been increasingly powered by the international Jihadi Movement, namely runaway fighters from Iraq and Syria, and arms from the disintegration of Libya,” he told the Assembly.

On a brighter note, he drew inspiration from “the remarkable leadership” of Ethiopia and Eritrea to restore peace between them.

According to Mr. Buhari, their “remarkable show of Statesmanship” has galvanized neighbouring countries, including Djibouti and Somalia to push for peace in the subregion.

He noted that a topical consequence of global conflict is the irregular migration of affected people from the Middle East, Afghanistan and Africa to Europe.

Against that backdrop, Nigeria welcomed “the successful conclusion of the negotiations on the first-ever Global Compact for Safe, Orderly and Regular Migration,” and look forward to its adoption in Marrakech later this year – “to protect the rights of migrants worldwide, while addressing the concerns of countries of ‘origin,’ ‘transit,’ or ‘destination’.”

Calling migration “a constant in human affairs,” he stated that Africa was grateful to the countries that treated migrants with compassion and humanity, “notably Germany, Italy and France.”

Mr. Buhari also cited climate change, “one of the greatest challenges of our time,” as another reason for irregular migration, noting that it has “drastically shrunk Lake Chad” and was “parching” otherwise fertile, arable lands.

“The Lake was a major source of livelihood to more than 45 million inhabitants of the region,” he said, explaining that its shrinking has taken jobs, rendered people poor and vulnerable, and exposed to extremists and terrorist elements.

Mr. Buhari called for rededicated international engagement to address the root causes of conflicts in the region.

“What is required is continuous and robust UN cooperation with national Governments and sub-regional and regional organizations, such as the Lake Chad Basin Commission, the Economic Community of West African States and the African Union, to enhance capacity in conflict prevention, conflict management and peace building,” the President concluded.

♦ Receive daily updates directly in your inbox - Subscribe here to a topic.
♦ Download the UN News app for your iOS or Android devices.
nigeria|General Debate 73