UN Photo/Kim Haughton
Nickolay Mladenov, the UN Special Coordinator for the Middle East Peace Process, briefs the Security Council on the situation in the Middle East, including the Palestinian question.
20 September 2018
Peace and Security

“The urgency of the situation that we face on the ground is really desperate – Gaza can explode any minute,” underscored UN Special Coordinator Nikolay Mladenov, briefing the Security Council.

In his briefing, Mr. Mladenov spoke of Israel’s continued military occupation of Palestinian territory; uncertainties about the future of the peace process and the two-state solution; Hamas’ continuing hold on Gaza and its militant activity, as developments which continue to complicate the situation on the ground.

We must overcome the current impasse and refocus our efforts on ultimately returning to meaningful negotiations to end the occupation and bring a just, lasting and comprehensive resolution to the Israeli-Palestinian conflict – Nikolay Mladenov

Violence, acts of provocation and inflammatory rhetoric – both by Hamas and Israel – also continued during the reporting period, he added, noting that on at least three occasions the situation “escalated dramatically” and calm was restored only after Egypt and the UN intervened to de-escalate tensions.

On the humanitarian side, of most concern is the power crisis in Gaza and, with the UN running out of funds for emergency fuel, critical health, water and sanitation facilities are at “immediate risk” of shutting down. Levels of critical medicines are also running dangerously low.

The crisis is being further exacerbated by the serious cash shortfall - due to the withdrawal of US funding - confronting UNRWA, the Organization’s Relief and Works Agency for Palestine Refugees, he said, calling for urgent funding to allow it to continue its vital services.

Concluding his briefing, Mr. Mladenov reminded the Security Council that twenty-five years have passed since the Oslo Accords were signed in the US capital, Washington D.C.

“It was a historic moment that captured the world’s attention and filled Palestinians, Israelis and the region with hope that a genuine peace could be realized. Sadly, that courageous vision of a lasting peace now lies in tatters,” he said.

“We must restore that hope – the alternative is perpetual cycles of violence. We must overcome the current impasse and refocus our efforts on ultimately returning to meaningful negotiations to end the occupation and bring a just, lasting and comprehensive resolution to the Israeli-Palestinian conflict.”

Ahead of the Security Council meeting, France, Netherlands, Poland, Sweden, and the United Kingdom (EU member countries with a seat on the Council); Belgium and Germany (incoming Council members in 2019) and Italy (a Council member until last year) issued a joint statement urging Israeli authorities to reconsider its decision to demolish Khan al-Ahmar, a Palestinian village in the West Bank, as well as highlighting the importance of a negotiated two-State solution. 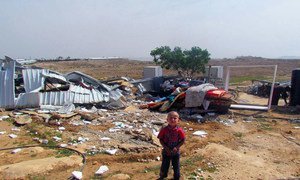