UNMISS/Isaac Billy
The UN Special Representative of the Secretary-General for South Sudan, David Shearer (c), updates the media in Juba on 19 September 2018, following the signing of a revitalised peace agreement between warring parties in the country.
19 September 2018
Peace and Security

The South Sudanese soldier who shot and wounded a UN peacekeeper on Saturday is facing a court martial, said David Shearer, head of the UN Mission in South Sudan (UNMISS), during a press conference in the capital, Juba.

Speaking on Wednesday, Mr. Shearer said that the peacekeeper, a Nepalese national, had been travelling with a convoy to collect water when the shooting occurred. The peacekeeper, he added, is recovering at a hospital in Juba. The authorities have assured UNMISS that the shooting was an “isolated incident.”

The targeting of UN peacekeepers in South Sudan, said Mr. Shearer, is a result of insecurity in the country, which is still ongoing, despite the signing of a revitalized peace agreement a week ago.

He welcomed the reduction in the level of fighting since last year, but said that there have been allegations of ceasefire violations, including flare-ups of fighting in southern Central Equatoria, which are being investigated by ceasefire monitors.

Mr. Shearer reiterated calls, first made following the shooting of the peacekeeper, for the local authorities and the Government of South Sudan to “establish command and control over the armed forces to ensure this kind of unruly behavior does not occur again.”

He also echoed comments on the progress of the peace process – delivered to the UN Security Council on Tuesday – by  Jean-Pierre Lacroix, the head of UN Peacekeeping Operations, and Nicholas Haysom, outgoing UN Special Envoy for Sudan and South Sudan.

From his vantage point on the ground, Mr. Shearer agreed that the peace accord is an important step on the long road to peace, but said there was still a lack of trust between the “warring factions” – the national army loyal to the government of President Salva Kiir, and forces loyal to main political opposition leader, former Vice-President, Riek Machar.

Mr. Shearer will travel to UN Headquarters in New York, to take an active part in discussions during the General Assembly high level week which begins on Monday, and expand on how UNMISS can best support the implementation of the peace agreement.

♦ Receive daily updates directly in your inbox - Subscribe here to a topic.
♦ Download the UN News app for your iOS or Android devices.
UNMISS|South Sudan 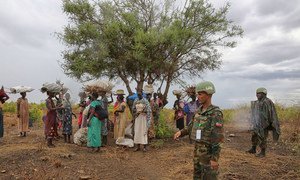 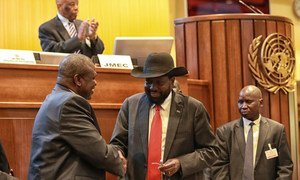