UN Photo/Eric Kanalstein
Residents attend the opening of a new peacekeeping base in the town of Yei established by the UN Mission in South Sudan (UNMISS) at the request of the town's inhabitants to guard against ongoing violence (January 2018).

A “lack of command and control” on the part of South Sudan’s government, just days after signing a new peace agreement to end years of brutal civil conflict, is one of the factors which led to the shooting of a United Nations peacekeeper on Saturday, the UN mission chief in the country has said.

Special Representative David Shearer, who heads UNMISS, said in a statement that a Nepalese peacekeeper was shot and wounded by a government soldier early in the day, who was part of a convoy travelling near the town of Yei, in Central Equatoria.

A government SPLA solider had begun shooting in the air near the UNMISS convoy of four vehicles, including two water tankers.

“The soldier then shot directly at one of the vehicles, hitting the Nepalese peacekeeper in the leg, and ran off into a crowd. The troops were unable to return fire as they did not want to risk injuring civilians,” said UNMISS.

This situation is evidence of a lack of command and control of armed forces which has resulted in unruly elements who continue to commit human rights abuses in the area - UNMISS chief, David Shearer

“The peacekeeper was evacuated to the UN base before being airlifted to Juba for further medical treatment.”

Mr. Shearer said that “this direct attack on UN peacekeepers here to help the people of South Sudan, is unacceptable. The perpetrator must be found and held accountable by Government authorities.”

The New Zealander added that “this situation is evidence of a lack of command and control of armed forces which has resulted in unruly elements who continue to commit human rights abuses in the area. It is beholden on the Government to bring their forces under control.”

This morning’s attack follows reports of fresh clashes between government and opposition forces in the area surrounding Kajo-Keji in Central Equatoria. The Ceasefire and Transitional Security Arrangements Monitoring Mechanism (CTSAMM) has confirmed that it is investigating alleged violations of the ceasefire agreement in the Yei area.

Prior to the wounding of the peacekeeper today, Government soldiers had fired approximately 50 shots, about 500 meters from the UN base in Yei.

Earlier this week, President Salva Kiir shook the hand of his longtime rival and former Vice-President, Riek Machar, in the Ethiopian capital, Addis Ababa, as hopes rose that despite failed agreements in the past three years, lasting-peace across the world’s youngest country, may finally be possible.

“The signing of the revitalized peace agreement by all parties to the conflict three days ago heralded a time of optimism for the future. It is disheartening that, despite the new agreement, fighting is continuing in the Central Equatorian region,” said Mr. Shearer. “All forces must disengage as required by the peace agreement and end the violence. The parties must also work together to build trust between themselves and with the people of South Sudan who are suffering immensely from the ongoing conflict.” 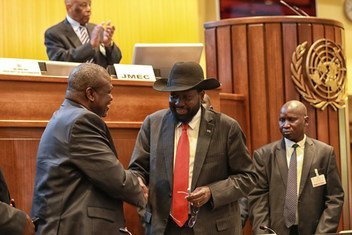 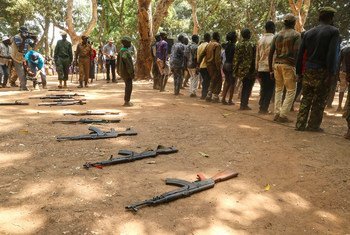 Virginia Gamba, the United Nations Special Representative for Children and Armed Conflict, on Friday called for much greater accountability and effort, to prevent grave violations against children across the world’s youngest nation, South Sudan.