Confidence and consensus around key issues are still required ahead of this year’s presidential and legislative elections in the Democratic Republic of the Congo (DRC), the Security Council heard on Monday.

Leila Zerrougui, head of the UN Stabilization Mission in the country, known by its French acronym, MONUSCO, briefed ambassadors on the latest developments related to the December vote, which will mark the first peaceful transfer of power in the country.

However, key concerns persist, including disputes over the eligibility of candidates, the use of voting machines, women’s participation, targeting of political activists and human rights defenders, insecurity, and what Ms. Zerrougui called “the perceived credibility” of the electoral process.

“It is also imperative that respect for fundamental rights and freedoms is assured throughout the territory of the DRC in a consistent manner, so that all Congolese citizens can participate freely and fairly in all stages of the electoral process moving forward,” she said, speaking via videoconference from the capital, Kinshasa.

“A failure to allow for political engagement and participation as foreseen by the Congolese constitution, could jeopardize the peaceful nature and the credibility of the polls.”

MONUSCO is providing technical support for the elections, which are set to take place on 23 December.  While the DRC authorities have not requested external logistical or financial support, Ms. Zerrougui underscored her mission’s readiness to assist.

The DRC ranks among the world’s largest countries, and nearly 20,000 people have registered as candidates in the provincial elections, while more than 15,220 will take part in the legislative race.

Ms. Zerrougui reported that incumbent Joseph Kabila will not be in the running, having “respected his commitment not to be a candidate”. Though first elected in 2006, President Kabila has been in power since 2001, following the assassination of his father, Laurent-Desire Kabila.

Nineteen men will vie for the presidency as the sole woman candidate, Marie-Josée Ifoku, was deemed unsuitable to stand. Three former presidents, as well as former vice-president and ex-rebel leader Jean-Pierre Bemba, were also among the six persons excluded from taking part in the race.

Overall, women account for roughly 12 per cent of those seeking office in the DRC, a source of concern for Solange Lwashiga Furaha, spokesperson for the local civil society group Rien Sans les Femmes (Nothing Without Women), which has been advocating for gender equality at all levels of decision-making.

“The fact that there is less than 15 per cent of women is a significant issue,” she said, speaking alongside the UN mission chief.

The Security Council also heard from Monseigneur Marcel Utembi, president of the National Episcopal Conference of the Congo (CENCO), who praised the “peaceful climate” in which the registration of candidates took place.

CENCO facilitated a December 2016 agreement that allowed President Kabila to stay in power beyond the end of his second term, which would have expired at the end of that year.

Speaking from Kisangani,  Monseigneur Utembi listed recommendations for the  authorities, including taking measures to reduce tensions in the wake of the vote.

“The credibility of elections depends to a great extent on the observation of these elections by national and international groups who have an interest in doing so,” he said.

“CENCO wishes to contribute to observation of the next elections, and we plan to use more than 1,000 observers over the long-term, and more than 40,000 over the short-term.  It is counting on the support of the Independent Electoral Commission to accredit all of these observers, who will be well-trained, and to also give them the opportunity to also carry out this important work, which will undoubtedly contribute to reducing tensions in the post-electoral climate.”

♦ Receive daily updates directly in your inbox - Subscribe here to a topic.
♦ Download the UN News app for your iOS or Android devices.
DRC|elections 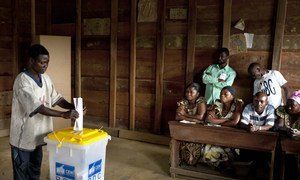 The United Nations Secretary-General has commended the President of the Democratic Republic of the Congo (DRC), Joseph Kabila’s decision on Thursday, not to stand in elections scheduled to take place on 23 December.