WHO-Eugene Kabambi
On 8 August 2018, the vaccination of frontline health care workers started, followed by the vaccination of community contacts and their contacts, in Mangina, North Kivu, the epicenter of the 10th Ebola epidemic to hit the Democratic Republic of the Congo. There are currently 3220 doses of rVSV-ZEBOV Ebola vaccine available in Kinshasa.
24 August 2018
Health

“Thousands of civilians have fled their burned-out villages, bringing reports of brutal attacks,” Andrej Mahecic, spokesperson for the Office of the UN High Commissioner for Refugees (UNHCR), told the regular press briefing in Geneva Friday, following reports that a case of Ebola infection and one suspected case have been found in one town in the area, Oicha, which is surrounded by armed groups.

Forced displacement in this part of the country remains massive. It is estimated that more than a million people are displaced in North Kivu. This is the highest concentration of internally displaced people (IDPs) in the DRC. An estimated half a million people have been forced from their homes this year alone.

At the same briefing, Dr. Peter Salama, WHO Deputy Director-General of Emergency Preparedness and Response, said that the discovery of Ebola infection in the hard-to-reach part of eastern DRC could mark a “pivotal” point in the response to the deadly disease.

“It really was the problem we were anticipating and the problem … we were dreading. Our teams have responded this week. They’ve had to reach Oicha with armed escorts... Once they reach Oicha, they are able to move within Oicha town more freely, because the town itself is a yellow zone from a security perspective,” he explained.

Driving through empty villages in the east of DR Congo where violence has caused massive forced displacement. UNHCR is scaling up capacity to respond to growing humanitarian needs. https://t.co/L06Fes8Wtd pic.twitter.com/sjJbta5tb9

Mr. Mahecic said UNHCR is particularly worried about the deteriorating situation in the Ebola-hit northern territory of Ben, where Oicha town is located. The area is home to some 1.3 million people. Spiralling conflict has left the population living there virtually in a state of siege since October 2017. Reports of increased human rights violations and restrictions of humanitarian access are frequent.

Estimates are that more than 100 armed groups are active in the province, continually terrorizing the population. Despite a large-scale military offensive of the Congolese Army against one of the main rebel groups, the Allied Democratic Forces (ADF) since January, there has been no let-up in the violence.

“Despite security challenges, a UNHCR team accessed the area north of Beni earlier this month and conducted humanitarian assessments in Oicha and Eringeti districts,” he said, adding: “Residents told our staff about brutal attacks against the civilians carried out with machetes. Stories of massacres, extortion, forced displacement and other human rights violations are frequent.”

Further, sexual and gender-based violence is rampant across the Beni territory. Many children are being recruited as child soldiers. The violence is particularly rampant in the so-called “triangle of death,” between the towns of Eringeti, Mbau and Kamango, on the Uganda-DRC border, as well as in the towns of Beni, Oicha and Mavivi.

UNHCR is scaling up its capacity in North Kivu to respond to the growing humanitarian needs.

“We are arranging additional emergency shelters and other humanitarian assistance to meet the needs of the displaced in Beni. While UNHCR’s humanitarian response is continuing despite the outbreak of Ebola, the prevailing security situation and drastic funding shortfall severely hamper our efforts. UNHCR’s DRC 2018 appeal totalling $201 million is only 17 per cent funded,” explained Mr. Mahecic. 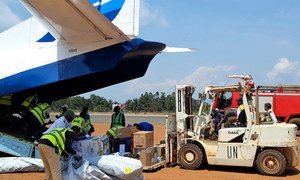 After seeing first-hand the complexities of the Ebola response in the conflict-affected region of North Kivu in the Democratic Republic of the Congo (DRC), the Head of the World Health Organization (WHO) called for “free and secure” access to the disease-affected people.