Recent drought has led to the loss of some 280,000 hectares of beans and maize in Guatemala, El Salvador and Honduras, potentially affecting the food and nutrition situation of more than two million people, two United Nations agencies warned on Friday.

The UN Food and Agriculture Organization (FAO) and the World Food Programme (WFP) are concerned by the fact that the months of June and July saw “lower-than-average rainfall” and “drier-than-average conditions”, which affected the first and principal crop cycle in Central America, known as the primera.

“Just when rural communities were recovering from the 2014 drought and the El Niño phenomenon of 2015 – the strongest recorded in recent history – a new drought is affecting the most vulnerable again,” said Miguel Barreto, WFP Regional Director for America and the Caribbean.

Maize and beans, main food staples in the region, have been the crops most-affected by the drought, according to the governments of Guatemala, El Salvador and Honduras, which reported losses of 281,000 hectares of these crops, on which the food and nutrition security of much of their populations depend.

These losses will increase the cost of these foods for the entire population.

The UN agencies warn that this may be compounded by the possible arrival of an El Niño by the end of the year, which could worsen the already “precarious” food and nutrition security situation of vulnerable rural communities in the region.

“Total or partial loss of crops means that subsistence farmers and their families will not have enough food to eat or sell in coming months,” read the joint statement released on Friday.

The Honduran Government declared the emergency this month, while the Government of El Salvador declared a red alert in July.

The second crop cycle – known as the postrera – which usually makes up for the deficiencies of the first harvest, takes place in November, but the UN agencies warned that “even if El Niño turns out to be a weak one, it will have a significant impact on the outcome of the second harvest”.

“With the support of the international community, we have worked together with the governments and rural communities… to help them become more resilient to extreme climatic variations, but we need to redouble our efforts and reach more rural communities,” explained WFP’s Miguel Barreto added.

After what happened in 2014 and 2015, humanitarian organizations provided food assistance to thousands of people in vulnerable communities in the region, to improve food security and strengthen resilience at family, community and institutional level. These activities included the conservation of soil and water, better agricultural practices and training to deal with natural disasters, as well as the strengthening of monitoring systems for food and nutrition security.

“It is urgent to improve the climate resilience of the inhabitants of Central America,” said the FAO Regional Representative, Julio Berdegué. “We are particularly concerned about the effect of this new drought on migration, in an international context that restricts the movement of thousands of people who, in their localities, will have great difficulty in securing the livelihood of their families,” he added.

To mitigate the risks this year, FAO and WFP, in close collaboration with governments and partners, plan to closely monitor the impact of the drought on the price of staple foods; develop analysis on the food and nutritional security of the most vulnerable; work on agreements to allow the regulated, safe and orderly temporary migration of people from the rural communities most affected by the drought; and mobilize resources to scale rainwater harvesting and storage systems and reduce the impact of future droughts. 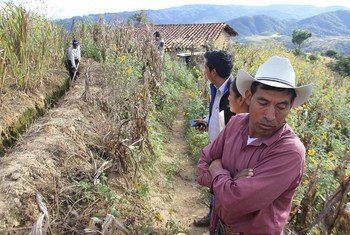 23 August 2017
A new inter-agency study released today found a correlation between prolonged droughts in El Salvador, Guatemala and Honduras – exacerbated by El Niño phenomenon from 2014 to 2016 – and the increase in irregular migration from these countries to the United States, the United Nations food relief agency reported.