Thursday afternoon, the 67th United Nations Department of Public Information (DPI)/Non-Governmental Organization (NGO) Conference concluded, pledging to “uplift those whose human rights are most under threat and to protect our planet by living in harmony with nature.”

“DPI is proud to work closely with civil society to plan this unique event for networking and examining together how the UN and the NGO community can work together solve global problems,” said Ms. Alison Smale, Under-Secretary-General for Global Communications.

The participants adopted by acclamation in the closing session an outcome document entitled ‘People Centered Multilateralism: A Call to Action,’ and which will be known by the shorthand the New York Action Plan.

It contains specific civil society commitments, as well as calls for the UN Secretary-General, Member States, multinational corporations and the UN itself.

“We are heartened to see how strong support is for multilateralism among civil society and how committed they are to partner in the spirit of the UN Charter,” Ms. Smale added.

The chair of this year’s Conference, Ms. Winnie Byanyima, Executive Director of Oxfam International, said: “The outcome document sets us on a path to reimagine multilateralism – how we work together to tackle the global problems we face.  I’m proud that that this week, we have had the audacity to identify those daunting challenges and to respond boldly and with one voice.”

Youth played an integral role in planning and participating in the Conference, including with a dedicated ‘youth hub’.  They also adopted a Youth Declaration, “We the Future,” part of the outcome document, which offers a set of visions, commitments and recommendations, drafted by and for youth.

At the closing, Ms. Smale announced that next year, Utah’s Salt Lake City would host the 68th conference. from 26 to 28 August.

Salt Lake City Mayor Jackie Biskupski said: “As a city committed to being inclusive, safe, resilient, and sustainable, it is an honour to be the first US host city of the UN-DPI Conference.”

She underscored that Salt Lake City would be an excellent opportunity for the UN and the world’s NGOs “to expand awareness in this country of sustainable development goals and the value of global unity.”

Two years ago, in the city of Gyeongju, Republic of Korea, the DPI/NGO Conference embarked on “an ethos of global citizenship.”

In that same people-centred spirit, this year’s Conference re-committed to foster multilateralism dedicated both to human rights and sustainable development – with a pledge to uplift the rights of those most under threat. 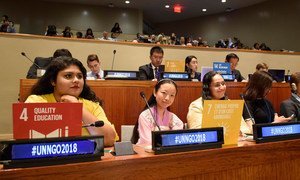 The 67th United Nations Department of Public Information/Non-Governmental Organization (DPI/NGO) Conference kicked off today at UN Headquarters in New York, with speeches affirming the importance of multilateralism, closer partnerships between the UN and civil society, and the role that young people have to play.