UN Photo/Devra Berkowitz
Details from 'Ark of Return,' the permanent memorial in acknowledgement of the tragedy and in consideration of the legacy of slavery and the trans-Atlantic slave trade.
23 August 2018
Culture and Education

On this 20th anniversary of the International Day for Remembrance of the Slave Trade and its Abolition, the United Nations is inviting the world to reflect on the legacy of slavery and remember to guard against racial prejudices, which continue to fuel everyday discrimination against people of African descent.

“UNESCO invites everyone, including public authorities, civil society, historians, researchers and ordinary citizens, to mobilize in order to raise awareness about this history that we share and to oppose all forms of modern slavery,” Audrey Azoulay, Director-General of the UN Educational, Scientific and Cultural Organization said in her message for the Day.

On the night of 22 August 1791, an uprising began in the western part of Saint-Domingue island, which, throughout the century, would greatly contribute to the abolition and dismantling of the transatlantic slave trade.

“The war that ensued culminated in 1804 in the independence of that part of the island, which took the name of Haiti, and led to the recognition of the equal rights of all its inhabitants,” the UNESCO chief continued, explaining the inspiration for the Day.

Each year UNESCO reminds the international community of the Day’s importance – which also pays tribute to those who worked hard to abolish slave trade and slavery throughout the world.

Ms. Azoulay pointed out that since 2001, trafficking and slavery have been recognized by the international community as crimes against humanity.

“Yet,” she added “these scourges resurface at regular intervals in different ways and in different places,” saying that new forms of slavery can be prevented by knowing the slave trade history.

The Slave Route Project, launched by UNESCO in 1994, has made it possible to identify the ethical, cultural and socio-political issues of this painful history.

“By developing a multidisciplinary approach, which links historical, memorial, creative, educational and heritage dimensions, this project has contributed to enriching our knowledge of the slave trade and spreading a culture of peace,” Ms. Azoulay said.

Meanwhile, the UN International Labour Organization (ILO) underscored that domestic workers are one of the groups most vulnerable to exploitation, violence, harassment and forced labour, saying that “many women end up being trapped in abusive work situations which in some cases may amount to modern forms of slavery.”

Sixty-seven million domestic workers who care for our homes and loved ones frequently suffer violence, harassment, exploitation and coercion – ranging from verbal abuse to sexual violence, and sometimes even death. Those who live -in-home are especially vulnerable.

“At the root of this situation is discrimination,” explains Philippe Marcadent, Chief of the ILO Branch related to Inclusive Labour Markets, Labour Relations and Working Conditions.

“Domestic workers are often not recognized as workers, and face discrimination as women, often from poor and marginalized groups, such as migrants and indigenous peoples.”

For many, daily abuses like lack of rest and non-payment of wages can quickly turn into forced labour.

After a year of abuse, one domestic worker recounted to the police: “Every day, she would tell me that I’m crazy and stupid […] Whenever they beat me up, I just cried in a corner.”

Today domestic workers are beginning to organize, and ILO is discussing a new legal instrument to combat violence and harassment in the world of work. 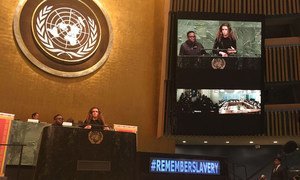 Students from around the world joined United Nations and Government officials in New York on Friday to celebrate the contributions made by the people of African descent, beginning from the time they were taken from their countries and forced into generations of servitude.