The 67th United Nations Department of Public Information/Non-Governmental Organization (DPI/NGO) Conference kicked off today at UN Headquarters in New York, with speeches affirming the importance of multilateralism, closer partnerships between the UN and civil society, and the role that young people have to play.

The two-day conference is an international forum, where around 2,000 representatives from over 300 NGOs meet with UN officials, leading influencers, members of academia and media to discuss issues of global concern.

This theme of this year’s edition is the value of multilateralism, at a time of rising scepticism about the role of the UN in solving some of the world’s greatest challenges. There is also a focus on opportunities for closer partnership between the UN and civil society, and working together to promote the 2030 Agenda for Sustainable Development, otherwise known as the 2030 Agenda.

Opening the conference, Alison Smale, Under Secretary-General for Global Communications, and head of the UN Department of Public Information, said that stronger links to civil society provide the greatest chance for dealing with global problems that no one country can solve.

Ms. Winnie Byanyima, Executive Director of Oxfam International and conference Chair, described the event as “a ground-breaking moment for civil society to advocate together for people-centered multilateralism that can tackle economic inequality, gender injustice and threats to rights-based governance.”

Highlighting the UN’s efforts to make the organization more relevant to young people, the conference recorded nearly 44 per cent youth registrants. Ms. Madison Ross, Co-chair of the Youth Sub-Committee, and a speaker at the opening plenary session, expressed her hope that the conference will serve “as an opportunity for youth to be heard and not undermined, benefiting all generations and all other sectors in achieving the Sustainable Development Goals (SDGs).”

The conference will assess how effectively the 2030 Agenda is being promoted and enacted, and explore global attitudes towards the UN. It will conclude with the presentation of the Official Outcome Document, drafted by civil society, for adoption at the closing plenary session. This will include a Youth Declaration, detailing the commitments made by young people to contribute towards the UN efforts in achieving the 2030 Agenda.

FEATURE: Number crunchers in the spotlight ahead of UN World Data Forum 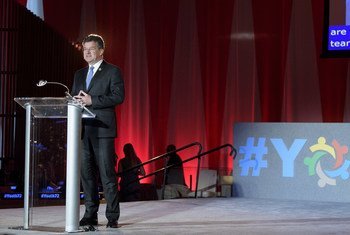 The United Nations needs to spend more time talking directly to young people across the world, beyond simply talking about their concerns, said the President of the General Assembly on Wednesday, opening a major Youth Dialogue event at UN Headquarters in New York.