Syria: WHO appeals for funding to sustain critical health care for millions trapped by conflict

With conflict raging in northwest Syria, the United Nations health agency has appealed for $11 million to provide life-saving care to parts of Aleppo, Hama, Idleb and Lattakia governorates.

“The health situation in north-west Syria is already dire and looks set to deteriorate,” said Michel Thieren, Regional Emergencies Director for the World Health Organization (WHO).

“If WHO does not receive additional funding, more than two million people caught in the cross-fire may have no access to essential health care services, including life-saving trauma care.”

Fleeing mounting insecurity and violence, hundreds of thousands of people, many of whom have already been displaced, may be forced to move again. Idleb is in particularly dire straits, as more than half a million people have been displaced to and within the governorate since January 2017.

Geert Cappelaere, UNICEF Regional Director for the Middle East and North Africa, had said that there was “at least one million children at risk in Idlib alone.”

Meanwhile, growing crime and inter-factional fighting are adding to the insecurity as targeted assassinations and kidnappings also rise.

Many internally displaced persons (IDPs) are living in makeshift, overcrowded shelters with little access to health care, safe water and sanitation, according to WHO.

After more than seven years of conflict, which has claimed hundreds of thousands of lives and forced millions to flee, those remaining are faced with degenerating health services, leaving them vulnerable to communicable disease as acute malnutrition is predicted to increase.

Moreover, a decline in vaccination coverage rates threaten renewed outbreaks of preventable diseases, such as polio, and jeopardize WHO’s efforts to globally eradicate the disease.

“As matters stand, over half of the country’s public health care facilities have been destroyed or forced to close after years of conflict,” said Dr. Thieren.

Facing widespread need across many parts of the country, the humanitarian community is finding itself increasingly compromised as a gap in funding for health has placed millions of vulnerable Syrians at increased risk.

WHO said it would use any additionally received donor funds to support primary health care, childhood vaccination and trauma services in north-west Syria; and to strengthen referral systems to transfer critically ill and wounded patients to hospitals for specialized care.

The UN health agency flagged that it would also facilitate medical evacuations and deliver essential life-saving medicines and equipment to hospitals, clinics and mobile teams to treat people in need.

♦ Receive daily updates directly in your inbox - Subscribe here to a topic.
♦ Download the UN News app for your iOS or Android devices.
aleppo|Idleb|Hama 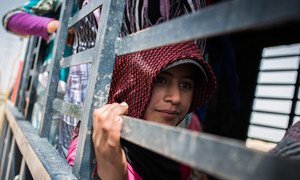 Aid access to embattled Syrians may soon improve following recent military gains by the Government, but the war “cannot be allowed to go to Idlib”, the head of the UN’s Humanitarian Task Force said on Thursday.