A group of United Nations rights experts are urging the Japanese government to urgently protect tens of thousands or workers hired to help decontaminate the Fukushima nuclear plant, who are reportedly being exploited and exposed to toxic nuclear radiation.

“We are deeply concerned about possible exploitation by deception regarding the risks of exposure to radiation, possible coercion into accepting hazardous working conditions because of economic hardships, and the adequacy of training and protective measures,” they added.

An 8.9 magnitude earthquake hit Japan in March 2011, which was followed by a tsunami that inundated everything along the eastern coastline around Fukushima Prefecture.

Subsequently, the International Atomic Energy Agency (IAEA) was informed of an explosion at one of the reactors in the Fukushima Daiichi nuclear power plant that leaked radioactive material. Three of the reactors failed, and hundreds of thousands were evacuated from the area.

Seven years after the nuclear meltdown, contamination and exposure to radiation remain a hazard for workers trying to make the area safe.

“We are equally concerned about the impact that exposure to radiation may have on their physical and mental health,” the experts asserted.

Since that time, tens of thousands of workers have been recruited under a decontamination programme.

Japan’s Ministry of Health, Labour and Welfare indicated on its website that 46,386 workers were employed at Fukushima during 2016; and the Radiation Worker Central Registration Centre of Japan showed that as many as 76,951 decontamination workers were hired in the five-year period up to 2016.

“The people most at risk of exposure to toxic substances are those most vulnerable to exploitation: the poor, children and women, migrant workers, people with disabilities and older workers,” the experts continued. “They are often exposed to a myriad of human rights abuses, forced to make the abhorrent choice between their health and income, and their plight is invisible to most consumers and policymakers with the power to change it.”

The UN rights experts have engaged in a dialogue with the Government since last year, taking into account a reply to their most recent concerns, including “detailed reports” flagging that decontamination contracts were granted without relevant experience.

“These arrangements, together with the use of brokers to recruit a considerable number of the workers, may have created favourable conditions for the abuse and violation of workers’ rights,” the UN experts said.

As part of its Universal Periodic Review, Japan recently agreed to follow-up on a recommendation to restore pre-radiation levels to protect the health of pregnant women and children.

The experts offered their services on how to address the ongoing issue of workers exposed to toxic radiation.

In September, one of the UN experts, Baskut Tuncak, who covers environmental management and disposal of hazardous substances, will present a report to the UN Human Rights Council, calling on States and employers to strengthen protection for workers from exposure to toxic substances.

The two other UN experts in discussion with the Japanese Government are Urmila Bhoola, Special Rapporteur on contemporary forms of slavery, and Dainius Puras, who champions the right to physical and mental health.

♦ Receive daily updates directly in your inbox - Subscribe here to a topic.
♦ Download the UN News app for your iOS or Android devices.
Fukushima|nuclear 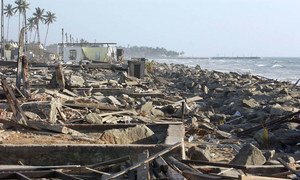