UNICEF/Tanya Bindra
An unaccompanied minor deported back to Guatemala by Mexican authorities, is led through Guatemalan immigration to be reunited with her family at La Aurora International Airport, Guatemala City, Guatemala on May 1, 2018.
16 August 2018
Human Rights

The many life-threatening dangers faced by children from Central America who are being deported from the United States of America and Mexico, are highlighted in a new report from United Nations Children’s Fund (UNICEF) on Thursday, which also draws attention to the traumatic consequences of family separation by migration authorities.

In the first 6 months of this year, almost 25,000 women and children from northern Central America were deported after arriving in Mexico and the US, in search of asylum or a better life. 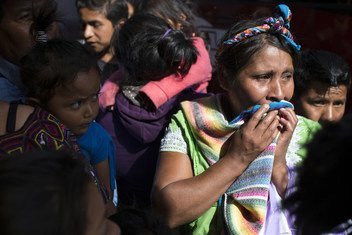 Central American countries are some of the poorest in the Western Hemisphere: almost three quarters of Honduran children are living in poverty. Many families take out loans to finance their departure, and, when they are sent back, children can find themselves homeless or unable to pay for basic necessities.

For those who fled their homes to escape gang violence (endemic in communities across northern Central America, with hundreds murdered every year), a return can mean a heightened risk of attack. In fear of their lives, many avoid their towns and villages and end up internally-displaced. 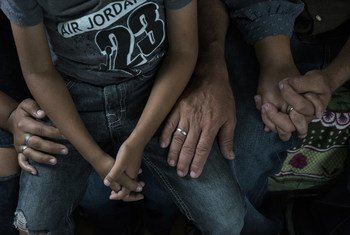 The trauma suffered by children held in detention by migration authorities, and separated from their families, can have a negative effect on the child’s long-term development, said the agency report.

María Cristina Perceval, UNICEF Regional Director for Latin America and the Caribbean, urged governments to consider the needs of children before deporting them, and to protect and reintegrate them once they return home: “Millions of children in the region are victims of poverty, indifference, violence, forced migration and the fear of deportation. Being returned to impossible situations makes it more likely that they will migrate again.”

The report makes a series of recommendations to keep refugee and migrant children safe. These include allowing them to be with their families and supporting alternatives to detention; safeguarding their wellbeing, and solving the problems that force them to leave home in the first place.

UNICEF/Tanya Bindra
Teenage boys deported back from Mexico arrive at the governmental reception shelter "Nuestras Raices" ("Our Roots", in English) in Quetzaltenango, Guatemala on May 3, 2018.
♦ Receive daily updates directly in your inbox - Subscribe here to a topic.
♦ Download the UN News app for your iOS or Android devices.
refugees and migrants|child migrants

The number of people fleeing violence and persecution from States in Central America, including Guatemala, El Salvador and Honduras, has risen by nearly 60 per cent in the space of just a year, the UN refugee agency (UNHCR) has warned.