In a Presidential Statement released on Friday, the 15-member body acknowledged UNOCA’s role, in cooperation with other partners, in promoting inclusive dialogue in the region; its work with the UN Office for West Africa and the Sahel (UNOWAS) to develop a strategy addressing the root causes of the security and humanitarian crisis in the Lake Chad Basin; and its support for regional anti-piracy efforts in the Gulf of Guinea.

However, the statement highlights grave concerns over the security situation and human rights abuses. Terrorist attacks by Boko Haram, ISIL (also known as Da’esh), the Lord’s Resistance Army and other armed groups, are ongoing. There is also continued maritime insecurity in the Gulf of Guinea, and a pervasive threat of transnational organised crime, including the threat of mercenary activities.

The statement notes ongoing violence by armed groups against civilians and UN peacekeepers, human rights violations against children, and sexual violence. Incitement to ethnic and other religious hatred is on the rise, as well as manipulated hostility towards the UN Stabilization Mission in the Central African Republic (MINUSCA) and other international organisations.

In the report, the Security Council tasks UNOCA with consolidating peace and resolving tensions following the various elections that took place between 2015 and 2018, working to prevent election-related violence, improving maritime security in Gulf of Guinea, and combating Boko Haram.

UNOCA, says the Council, should take gender considerations into account (ensuring that women play a key role in conflict prevention, mediation and resolution), counter the illicit trade in weapons, and develop long-term strategies to build resilience in the face of climate change and natural disasters, which are having an adverse effect on regional stability.

In order to improve regional peace and security, the Security Council called on the Secretary-General to conduct a strategic review of UNOCA’s activities, proposing ways to improve coordination between the various UN agencies operating in the region. These include UNOWAS, MINUSCA and the UN Stabilization Mission in the Democratic Republic of the Congo (MONUSCO).

♦ Receive daily updates directly in your inbox - Subscribe here to a topic.
♦ Download the UN News app for your iOS or Android devices.
peacekeeping|security council 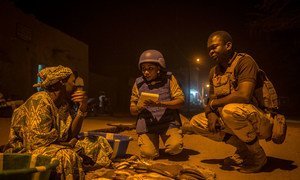 Regional security topped the agenda of a United Nations-backed joint summit on Central and West Africa searching, among other things, for a practical approach to fighting terrorism. 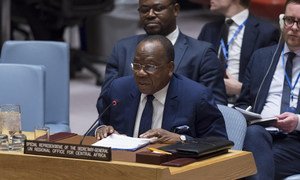 The scourge of terrorism and violent extremism continues to affect all of Central Africa and divert government resources from much-needed development programmes to costly security operations, a senior United Nations official told the Security Council on Wednesday.