Addressing the UN Security Council on Thursday, he commended in particular the adoption on 3 August of a roadmap for the 2020 elections that brought the various political leaders to a consensus. The Special Envoy commended President Pierre Nkurunziza for his recent commitment to leave office in 2020 and for pledging his “full support” for whoever emerges from the voting process, as the new president.

The current crisis in Burundi began in April 2015, when President Nkurunziza began his campaign for a disputed third-term in office, triggering protests and a failed coup attempt.

In his briefing, Mr. Kafando noted the improvement of the security situation since the 17 May national referendum on the new constitution which saw nearly three-quarters of voters registering their approval, or 73 per cent.

“Since the constitutional referendum, apart from some objections by the opposition, the situation has remained calm,” he said, all the while encouraging the government to “remain vigilant”.

Regarding the humanitarian situation caused by the onset of the crisis three years ago, the Special Envoy commended the efforts made by Burundi, Tanzania and the UN refugee agency (UNHCR), to enable the voluntary return of some 35,000 Burundian refugees since September last year.

“These efforts must be sustained, respecting the principles of voluntary returns and guaranteeing the dignified reintegration of the returning refugees in their host communities,” he stated.

He concluded his briefing calling on the authorities to finalise their agreement with the UN Office of the High Commissioner for Human Rights (OHCHR) so that that his own office in Bujumbura, the capital of Burundi, could “operate in the best conditions”.

♦ Receive daily updates directly in your inbox - Subscribe here to a topic.
♦ Download the UN News app for your iOS or Android devices.
Burundi|security council 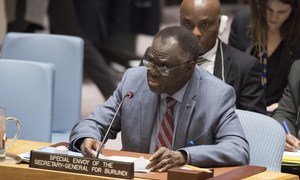 Inclusive talks remain the only way to find a lasting solution to the political, socio-economic and humanitarian crisis that has engulfed Burundi since 2015, the United Nations envoy for the African Great Lakes country said on Thursday.