UN News/Elizabeth Scaffidi
Statue of Buddha on a boat along the Mekong River bank in Chiang Rai, Thailand. Twelve youth football players and their coach were rescued alive in July 2018 after heavy seasonal flooding trapped them for over two weeks in the nearby Tham Luang caves.
9 August 2018
Migrants and Refugees

The decision of the Thai Government to grant citizenship to three of the boys recently rescued after being trapped in a flooded cave, along with their football coach, has been welcomed by UN Refugee Agency, UNHCR.

Following global media coverage of the rescue, it emerged that although the three youngsters together with their coach were resident in Thailand, they were officially stateless. Almost half a million people in the country, often from nomadic hill tribes and other ethnic groups that have been based in border regions for centuries, do not hold Thai citizenship.

Granting the “Wild Boars” team members secure status should make a significant difference to the prospects of the boys and their coach, according to Carol Batchelor, UNHCR’s Special Advisor on Statelessness: “by granting them citizenship, Thailand has provided them with a formal identity that will pave the way for them to achieve their aspirations and to participate as full members of society”.

Worldwide, several million people are stateless, and can find themselves denied access to basic rights and services. Other restrictions include being refused the right to travel, marry, own property, or work.

Thailand has been hailed by UNHCR as a leader in regional efforts to end statelessness. In the last decade 100,000 people have been granted Thai citizenship, and the Government has committed to finding nationality solutions for all those living within its borders, by 2024.

Referring to the Thai rescuees, Batchelor referred to the Government’s actions as “a shining example of how positive action by a State, can aid people and quickly resolve their stateless situation. We welcome this effort by Thailand and urge all States hosting stateless populations to help eradicate this entirely avoidable blight on humanity.”

UNHCR says it will continue to support the Thai Government and stateless communities in Thailand to reach the country’s ambitious 2024 target.

♦ Receive daily updates directly in your inbox - Subscribe here to a topic.
♦ Download the UN News app for your iOS or Android devices.
Thailand|Migrants and refugees 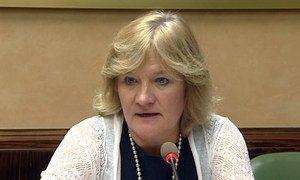