At a joint press conference in Tokyo on Wednesday with Prime Minister Shinzo Abe of Japan, UN Secretary-General António Guterres welcomed the ongoing talks between the United States and the Democratic People’s Republic of Korea (DPRK), as well as Japan’s renewed initiative of dialogue with the country.

“As Secretary-General of the United Nations, I am obviously totally committed to the implementation of all relevant Security Council resolutions on North Korea,” he told reporters, adding that he fully supported the negotiations taking place “with the objective that we all share, to see a total denuclearization that is verifiable, that is irreversible, to make sure that North Korea can be a normal member of the international community in this region.”

Standing alongside the Japanese leader, Mr. Guterres went on to express his support for Japan’s willingness to hold fresh talks with the North Korean leadership, following Prime Minister Abe’s offer of a high-level summit with the country.

The UN chief hailed these developments as timely, coming in the wake of a United Nation’s disarmament initiative, launched in May of this year. The new agenda, “Securing Our Common Future”, sets out his bold new vision for a world without nuclear arsenals and other deadly weapons. It focuses on three priorities — weapons of mass destruction, conventional weapons and new battlefield technologies.

He declared that “the North Korea and the Iran situations are two central aspects of our concerns to make sure that we preserve non-proliferation, but also recognizing that non-proliferation needs to be accompanied by effective disarmament, progressive disarmament measures in the nuclear dimension. And, at the same time, the full implementation of the ban on chemical weapons and biological weapons.”

He added that the agenda represented “disarmament to save lives”, taking into account the “devastating impact” of conventional weapons on civilian populations in urban centres and “disarmament for the future generations, namely to make sure that we do not develop arms, systems of arms, that fully escape the control of human beings and responsibility of human beings”.

The Secretary-General travelled to Nagasaki later on Wednesday, where he was due to meet Mayor Tomihisa Taue, and other local officials, as well as with some hibakusha, or survivors of the atomic bombs. 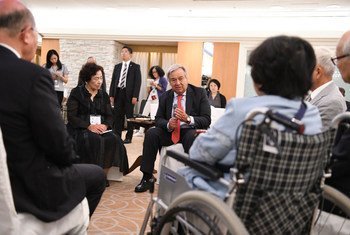 UN/Dan Powell
Secretary-General António Guterres meets with survivors of the atomic bomb attacks on Nagasaki and Hiroshima.
♦ Receive daily updates directly in your inbox - Subscribe here to a topic.
♦ Download the UN News app for your iOS or Android devices.
japan|DPRK

The summit between the leaders of the United States and the Democratic People’s Republic of Korea (DPRK) is “a promising development for global peace and security,” United Nations Secretary-General António Guterres said on Monday.