“I urge you to consider what support your Governments could pledge in solidarity with Bangladesh until solutions are found for refugees,” he said, addressing ministers of 26 countries in Bali, Indonesia, at the Seventh Ministerial Conference of the Bali Process. “We need also to work towards comprehensive solutions for the people of Rakhine State, so that they are not forced to move in the first place,” he added. 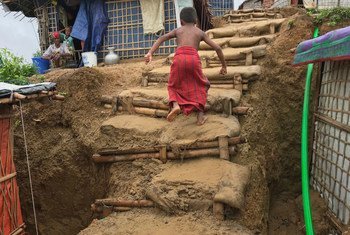 The Bali Process is a forum made up of 48 Governments and four international organizations — including UNHCR, the International Organization for Migration (IOM) and the UN Office on Drugs and Crime (UNODC) — which was set up to enable dialogue and discussion on issues relating to people-smuggling, human trafficking and related cross-border crime.

In March 2016, the Bali Declaration was adopted, highlighting the need for a comprehensive collective approach to resolve statelessness, invest in inclusive development, and expand safe pathways so that refugees and migrants would have legal alternatives to putting their lives at risk while on the move.

Since late August 2017, widespread and systematic violence against Myanmar’s mainly Muslim minority Rohingya has forced hundreds of thousands to flee their homes in Rakhine state for Bangladesh. Prior to that, well over 200,000 Rohingya refugees were sheltering in vast, makeshift camps in Bangladesh as a result of earlier displacements.

In his address on Tuesday, Mr. Grandi urged Governments to move “from consultation to action on the commitments they made” in the Declaration, asking them to consider how they could share Bangladesh’s refugee burden.

“Could your Government support, for example, construction of hospitals in Bangladesh,” he asked, “that will treat refugees but also improve the health care of local people? Can we conceive of development, trade, and migration-related measures to help the people and Government of Bangladesh shoulder the responsibility of hosting some 900,000 refugees, such as expanding guest worker quotas for Bangladeshis that would increase remittances, or reducing tariffs on garment exports from Bangladesh?” 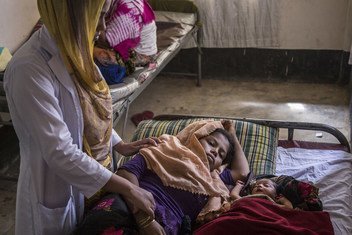 UNICEF/Robert LeMoyne
A midwife checks an exhausted new mother, who is recuperating next her 3-day-old sleeping infant daughter at the UNICEF-supported birthing centre in the Kutupalong camp for Rohingya refugees, in Cox’s Bazar, Bangladesh, October 2017.

The UNHCR chief also stressed that the “real solution” lies in Myanmar itself, and he appealed for regional support to address the root causes of displacement in Rakhine: for example, investing in infrastructure that connects communities instead of dividing them, and providing expertise on resolving statelessness and intercommunal conflict.

The High Commissioner also addressed business leaders of major corporations who attended the Conference as part of the Bali Process Government and Business Forum, a public-private partnership to expand legal labour migration and combat human trafficking.

“People forced to move can fall prey to modern slavery, adding the insult of exploitation to the injury of exile,” he said, adding that “there are now, more than ever, opportunities for refugees in this region to contribute to their host communities.” 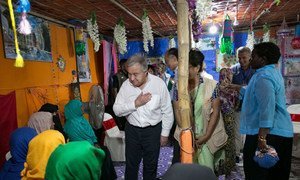 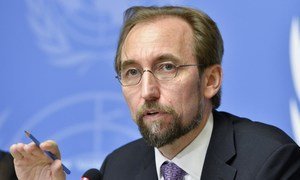