WHO
WHO team with the help of local residents hack their way through the Equatorial forest to bring Ebola vaccine to remote communities in the Democratic Republic of Congo.
3 August 2018
Health

Protecting vulnerable people in eastern Democratic Republic of the Congo (DRC) from the latest Ebola Virus outbreak is going to be “very, very complex”, given the huge logistical challenges and ongoing conflict there, the World Health Organization (WHO) said on Friday.

“We know for example that there have been around 20 deaths,” Dr. Peter Salama, Deputy Director General of Emergency Preparedness and Response, told journalists in Geneva.

“We can’t at this stage confirm whether they are all confirmed or probable Ebola cases,” he added. “We expect however that the overall case count will rise in coming days to weeks, based on the trajectory of epidemics at this stage in their development.”

Speaking just over a week after the UN agency declared the last Ebola episode over, some 2,500 miles away to the west in DRC’s Equateur province, Dr. Salama said that WHO was unaware of the public health emergency in North Kivu province at that point.

It’s going to be a very, very complex operation - Dr. Peter Salama (WHO)

The outbreak on the western side of the country in June, infected dozens, and led to 33 deaths, but despite several cases appearing in a major city on the Congo River, it was fully contained after a massive international and national response.

The top WHO official said that there was “no evidence” to suggest a link between the two outbreaks, although it appears “very likely” that they share the same deadly Zaire strain.

The death toll from the current Kivu episode is likely to rise, the WHO official said, adding that the alert was raised on 25 July after a woman and many members of her immediate family died after exhibiting symptoms consistent with Ebola.

“That event appears to have been a woman who was admitted to hospital around Beni, and on discharge had recovered from the original complaint”, he said. After leaving however, “she came down with a fever and other symptoms that were clinically consistent with Ebola, and later on, seven of her direct relatives also contracted the disease.”

Dr. Salama explained how longstanding conflict in Eastern DRC – involving more than 100 armed groups in the Kivu area and elsewhere – created an additional level of difficulty in trying to contain the deadly disease.

In the first week of February this year alone around Beni, attacks displaced more than 2,200, in addition to 1,500 displaced at the end of January. In the Djugu Territory to the south of North Kivu, inter-ethnic violence led nearly 30,000 to flee their homes to the provincial capital Bunia, at the beginning of the year.

“It’s going to be a very, very complex operation,” he said, noting that the vast country is home to the UN’s largest peacekeeping operation, the UN Stabilization Mission in the DR Congo (MONUSCO). 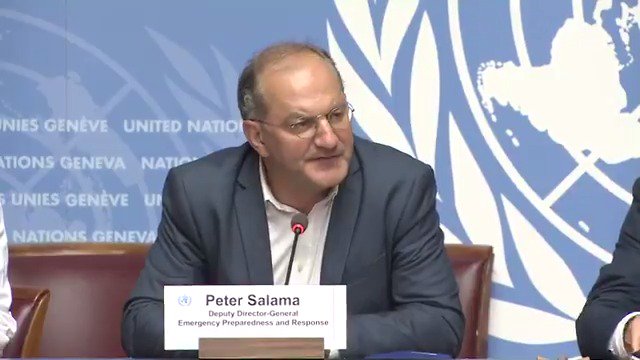 One million of the province’s eight million inhabitants are displaced and getting access to some of those in danger of coming into contact with Ebola, will require an armed escort in some cases, the WHO official explained.

There is also the additional threat that those fleeing violence may also head into nearby Uganda, Tanzania and Burundi, taking the infection with them, Dr. Salama said, noting that additional surveillance measures are being implemented at crossing points.

“On the scale of difficulty, trying to extinguish a deadly outbreak pathogen in a war zone” is as the top of the scale, he added.

In the most recent Ebola outbreak a key part of the emergency response involved tracing anyone who had come into contact with suspected carriers of the disease. WHO staff could travel hundreds of miles on a motorbike to do this vital work, but this is likely to be much more difficult in view of the high level of insecurity in the Kivus.

One immediate priority is to confirm whether the latest outbreak involves the Zaire strain, since this can be treated with the same vaccine that was employed in Equateur province.

“It’s good news and it’s very bad news,” Dr. Salama said. “The bad news is that this strain of Ebola carries with it the highest case-fatality-rate of any of the strains of Ebola, anywhere above 50 per cent and higher, according to previous outbreaks. So, it’s the most-deadly variant of the Ebola virus strains that we have, that’s the bad news. The good news is that we do have – although it’s still an investigational product – a safe and effective vaccine, that we were able to deploy last time around.”

♦ Receive daily updates directly in your inbox - Subscribe here to a topic.
♦ Download the UN News app for your iOS or Android devices.
Democratic Republic of the Congo|ebola