A 22-year-old employee of the UN migration agency, IOM, was among at least 13 killed. The woman, who is not being named, lost her husband during a bombing in the capital Kabul three years ago, and the couple had a daughter, aged six, who has now been orphaned.

“Our immediate thoughts are with her family and friends,” IOM said in a press statement, expressing the UN’s “deep sense of revulsion at this senseless attack that claimed the lives of at least 13 civilians.”

The agency said that another colleague was among the 20 injured in Wednesday’s armed attack in the eastern city of Jalalabad, When the government Department of Refugees and Returnees was strafed by gunfire for hours. IOM wished “him and all the injured a speedy and full recovery.”

IOM Director General William Lacy Swing condemned “this heinous crime which has taken the life of a brave colleague in Jalalabad and left another grievously injured.”

“My heart goes out to the families of the victims, and all of us in IOM are thinking of our staff working in difficult conditions across the country on behalf of the Afghan people,” he added.

The bombing is the latest in a series of attacks attributed to the ISIL terrorist group, also known as Da’esh, that have killed or wounded hundreds of people in eastern Afghanistan since mid-June amidst growing political and territorial rivalry between ISIL and the Taliban, according to news reports.

“There is no justification for such acts of terror,” IOM underscored, calling her “one of thousands of Afghans who form the backbone” of the UN’s daily work in the country “to help the most in need, supporting development and contributing to the restoration of peace and stability.”

On Thursday Secretary-General António Guterres issued a statement through his spokesperson spelling out: “Any attack deliberately targeting civilians is unjustifiable and in clear violation of international law.”

The Secretary-General extended his “deepest condolences” to the victims’ families and wishes for a speedy recovery to the injured.

“The United Nations stands with the people and Government of Afghanistan as they strive for peace and reconciliation in their country,” concluded the statement.

I condemn this heinous crime which has already taken the life of one of our brave IOM colleagues in Jalalabad yesterday and left another grievously injured. https://t.co/jogpvsn2CO

According to figures released mid-July by the UN Assistance Mission in Afghanistan, known as UNAMA, 1,692 civilians were killed and another 3,430 injured in the first six months of 2018 – a record high number for the first six months of any year, despite an unprecedented ceasefire between the Government and Taliban extremists in mid-June.

Referring to the young IOM worker, Tadamichi Yamamoto, head of the UN Mission in Afghanistan, UNAMA, said: “We mourn the loss of our colleague and, in tribute, commit ourselves to re-double our work to serve Afghanistan and its peoples.”

IOM stressed that deliberately targeting civilians and their places of work, such as the department in Jalalabad, is an “appalling crime.” The agency called for the “architects” of the attack to be brought to justice.

♦ Receive daily updates directly in your inbox - Subscribe here to a topic.
♦ Download the UN News app for your iOS or Android devices.
Afghanistan|suicide attacks 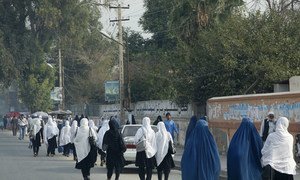