“When it comes to the start of breastfeeding, timing is everything,” said Henrietta Fore, the UN Children’s Fund’s (UNICEF) Executive Director, on the eve of World Breastfeeding Week.

“In many countries, it can even be a matter of life or death,” she added.

In the report, Capture the Moment, UNICEF and the World Health Organization (WHO) note that while newborns who breastfeed in the first hour of life are significantly more likely to survive, they estimate that 78 million newborns are excluded.

“Each year, millions of newborns miss out on the benefits of early breastfeeding and the reasons – all too often – are things we can change,” she continued. “Mothers simply don’t receive enough support to breastfeed within those crucial minutes after birth, even from medical personnel at health facilities.”

World Breastfeeding Week is celebrated annually from 1 to 7 August to encourage breastfeeding and improve the health of babies around the world by providing infants with the nutrients they need.

Even a few hours delay after birth could pose life-threatening consequences. Skin-to-skin contact along with suckling at the breast stimulate the mother’s production of breastmilk, including colostrum, which is produced ahead of regular milk, in the first few days after giving birth. It is so rich in nutrients and antibodies, that it is often referred to as the baby’s first vaccine.

According to the report, 65 per cent of countries in Eastern and Southern Africa have the highest rate of breastfeeding within the first hour, while East Asia and the Pacific have the lowest rate with only 32 percent benefitting from the early initiation.

UNICEF/Giacomo Pirozzi
A newborn sleeps in his mother's arms, in a health centre in Accra, Ghana.

While nearly nine-in-ten babies born in Burundi, Sri Lanka and Vanuatu are breastfed within that first hour, only two-in-10 born in Azerbaijan, Chad and Montenegro were nursed.

“Breastfeeding gives children the best possible start in life,” said Tedros Adhanom Ghebreyesus, WHO Director-General. “We must urgently scale up support to mothers – be it from family members, health care workers, employers and governments, so they can give their children the start they deserve.”

Analyzing data from 76 countries, the report reveals some of the reasons why too many newborns are left waiting.

One common practice is to discard colostrum, and instead feed the infant honey, sugar water or infant formula, which also delays a newborn’s first critical contact with its mother.

The rise in elective C-sections also has an impact, with a study across 51 countries noting that in this type of delivery, initiation rates among newborns are significantly lower.

Earlier studies, cited in the report, show that newborns who began breastfeeding between two and 23 hours after birth, had a 33 per cent greater risk of dying, compared to those who breastfed within one hour. And the risk more than doubled among newborns who started a day or more after birth.

The report urges governments and other decision-makers to adopt strong legal measures to restrict the marketing of infant formula and other breastmilk substitutes to help address the situation.

#WorldBreastfeedingWeek starts today @UNICEF @WHO. See why #breastfeeding is crucial for the health and development of newborns and their mothers. https://t.co/JmYlECajIn pic.twitter.com/8s88Hr7TYP 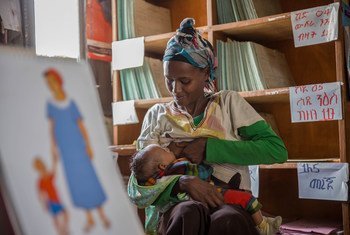