OCHA/Giles Clarke
A man and his sons travel to collect water underneath the Hajjah Road Bridge, in Hodeidah, Yemen, which was damaged in an airstrike in mid-2016. (file)
29 July 2018
Humanitarian Aid

Lise Grande said in a statement from the capital Sana’a, that “for weeks, we’ve been doing everything possible to help hundreds of thousands of people living in and near Hudaydah”, however, “these airstrikes are putting innocent civilians at extreme risk.”

The port is the primary gateway for food and humanitarian supplies into the war-stricken country, and together with the city overall, it has been in the hands of Houthi rebels since the end of 2014, who have been battling government forces aided by a Saudi-led coalition, which has been deploying war planes since fighting escalated in 2015.

Overall, 22 million people – or 75 per cent of the Yemeni population – require some form of humanitarian help or protection, including nearly 8.5 million who do not know where their next meal is coming from.

Coalition forces moved on Hudaydah in the middle of last month, but diplomatic moves led by the UN Special Envoy for Yemen, Martin Griffiths, have helped to prevent an all-out military invasion of the city, while the warring parties negotiate a potential deal that could allow fighters to leave.

Nevertheless, local health facilities reported in mid-July that around 328 had been injured and nearly 50 killed during fighting to that point.

“Since the start of the recent military offensive,” said Ms. Grande, “humanitarian partners have been providing food, water, emergency kits, cash and healthcare.” She added that 80 per cent of those displaced by fighting had received some form of help.

Airstrikes earlier this week near a reproductive health centre and public laboratory in Hudaydah, also hit and damaged a sanitation facility and water station in the Zabid neighbourhood, she said. That water station "supplies the majority of the water" to the whole city she stressed.

As one of the epicentres of the large cholera outbreak which began last year across Yemen, she said that the deadly water-bourne disease “is already present in neighbourhoods across the city and governorate. Damage to sanitation, water and health facilities jeopardizes everything that we are trying to do…We could be one airstrike away from an unstoppable epidemic.”

♦ Receive daily updates directly in your inbox - Subscribe here to a topic.
♦ Download the UN News app for your iOS or Android devices.
UN Humanitarian Coordinator for Yemen|UN Special Envoy for Yemen|Hudaydah 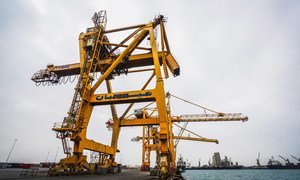 United Nations migration agency staff in Yemen say the key port city of Hudaydah remains “a difficult environment” for the delivery of aid to thousands of people displaced by heavy fighting this week. 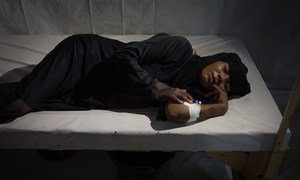