UNICEF/Daniele Volpe
Monique (left) transitioned from being a client at UNICEF-backed EVE for Life, which supports women and children living with or affected by HIV and AIDS, to a full-time employee, Montego Bay, Jamaica.

Although progress in treating people living with HIV has enabled them to work, they continue to face career discrimination, says a new study launched on Thursday by the United Nations labour agency.

Based on 13 country team surveys throughout the world, the International Labour Organization’s (ILO) HIV Stigma and Discrimination in the World of Work: Findings from the People Living with HIV Stigma Index, draws on interviews with more than 100,000 people living with the virus.

“It is sad to see that despite years of work, stigma and discrimination still persist,” said Shauna Olney, Chief of the ILO branch which deals with gender, equality, diversity and AIDS, speaking in Amsterdam at the launch.

“But treatment alone is not sufficient. We must work harder to reduce stigma and discrimination for people living with HIV at workplaces. They have a right to work and no one should deny them that,” she added.

Co-written with the Global Network of People Living with HIV, the report was introduced during the biennial International AIDS Conference “AIDS 2018”, which has been taking place this week; the largest conference on any global health or development issue in the world.

The data highlights a number of findings, such as that 10 out of 13 countries recorded a 30 per cent or higher unemployment rate for people living with HIV, with a greater rate among HIV-positive youth.

And women living with HIV are less likely to be employed then their male counterparts because of unpaid care responsibilities, and a lack of independent income.

Another key finding reveals that their HIV status costs many people their jobs – often because of employer or co-worker discrimination.

“When information about my [HIV] status reached my manager, he called me to his office,” said an anonymous individual facing discrimination, in the report. “First he told me I was working badly – doing too little work. Then he asked me to submit my resignation, without any serious explanation – as if I were resigning voluntarily.”

As a result, many people are hesitant to disclose their HIV status.  to employers or even co-workers. Testimony from Cameroon, in West Africa, shows the extent of the problem of accessing employment:

“I went to pick up my appointment letter only to be told that I had to undergo a medical examination. I already knew my sero-status, which I told the human resource officer about. She said I had to do the examination which confirmed my HIV-positive status. That marked the end of getting the job as they could not recruit me even though I had passed the interview,” said one anonymous interviewee.

Similarly, HIV-related discrimination remains a major cause for not receiving job promotions.

“What this report shows is that we still have a long way to go in our efforts to combat workplace related stigma and discrimination against people living with HIV,” said Sasha Volgina, GNP+ Programme Manager. “Access to healthcare and access to employment are inextricably linked and as such a meaningful commitment towards stemming the epidemic and securing the wellbeing of all people living with HIV, cannot be met without prioritizing ending HIV stigma in the workplace.” 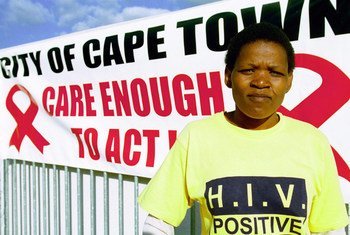