UN Photo/Loey Felipe
Leila Zerrougui, Special Representative and Head of the UN Stabilization Mission in the Democratic Republic of the Congo (MONUSCO), briefs the Security Council.

Major progress has been made on preparations for the upcoming elections in the Democratic Republic of the Congo, but “conditions for a level playing field are not yet in place”, said the most senior United Nations official based in the country.

“While significant progress has been made to respect the stages of the calendar process, the electoral process continues to suffer from suspicion and mistrust between the majority and the opposition, and, between the opposition and the Independent National Electoral Commission (CENI),” Leila Zerrougui, the UN Special Representative for the country and head of the Stabilization Mission, MONUSCO, told the Security Council on Thursday.

She noted that preparations have reached an important turning point with the opening, on Wednesday, of candidate reception offices for presidential and legislative elections, due to take place on December 23.

However, the opposition has expressed multiple grievances, she added, including over voting machinery and electoral records.

“I am however encouraged to note that, in the face of disagreements highlighted above, and against the backdrop of immense logistical and financial challenges, all major political parties were able to successfully enrol candidates for provincial legislative elections,” she said.

After a slow start, more than 18,000 candidates for office registered, in order to contest 715 seats.

Conditions for a level playing field are not yet in place, and without progress on these fronts, the credibility and inclusivity of upcoming elections may be at risk - Leila Zerrougui, head of MONUSCO

Although the final tally is yet to be published, initial indications suggest that women make up less than 12 per cent of all registered candidates, she said, urging political parties to ensure greater female representation and participation in forthcoming elections.

Ms. Zerrougui said she remains concerned by violations of human rights and fundamental freedoms that continue to impact negatively on democratic space as some peaceful demonstrations are suppressed.

She also said that civil society actors and political opponents continue to be arbitrarily arrested and media workers threatened.

“Thus, conditions for a level playing field are not yet in place, and without progress on these fronts, the credibility and inclusivity of upcoming elections may be at risk,” she warned.

“The Democratic Republic of Congo is at the crossroads. That’s the reason for which I appeal to all stakeholders to seize this opportunity to allow for inclusive, transparent and credible elections on 23 December to provide a more stable future for the DRC, Congolese women and Congolese,” she concluded. 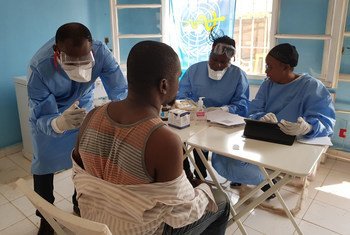 The Ebola virus outbreak in Democratic Republic of the Congo (DRC) has been declared over, thanks to a concerted national and international effort to contain the threat, the UN’s top health official said on Tuesday.