Following the death of at least 80 people due to wildfires close to the Greek capital, Athens, in recent days, the top UN official for Disaster Risk Reduction expressed her condolences and called for more investment in wildfire suppression and prevention across the world.

Describing the loss of life in Greece as a “truly heartbreaking tragedy”, Mami Mizutori, who is also UN Special Representative for Disaster Risk Reduction, passed on her “sincere condolences to the Greek government and people at this difficult time as the search continues for the missing.”

The fire started on Monday afternoon, and quickly spread across the small resort town of Mati, 18 miles east of Athens. The death toll is expected to rise, and hundreds have also been injured.

“We owe it to those who have lost their lives in Greece and elsewhere to step up efforts on wildfire suppression and prevention”, she added. “Investing in disaster response and preparedness are vital to this effort considering that global losses from wildfires reached record levels last year and few parts of the world are spared from this risk as climate change multiplies the threat.”

Ms. Mizutori stressed that fire hazard must be given due consideration when national and local strategies for disaster risk reduction are being developed, to meet the 2020 deadline for reducing disaster losses, as outlined in the Sendai Framework for Disaster Risk Reduction.

According to a report by the European Union, forests cover more than a third of the total land area of Europe. Large forest fires have repeatedly affected the continent, especially Mediterranean countries, the report says, and “human activity (whether accidental, negligent, or deliberate) is one of the most common causes”.

This year, Sweden has experienced major wildfires and 2017 saw a high number of deadly fires in Portugal, Spain and Italy. In recent years, the extent of areas devastated by fires in Europe, the western United States and south-east Australia has increased dramatically, according to the UN Office for Disaster Risk Reduction (UNISDR).

♦ Receive daily updates directly in your inbox - Subscribe here to a topic.
♦ Download the UN News app for your iOS or Android devices.
Disaster Risk Reduction|unisdr|forests 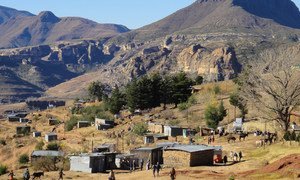 E-governance plays a critical role in building inclusive, resilient societies both before and in response to disasters, according to a United Nations report issued this week.