UNICEF/Alaa Al-Faqir
Families from rural Quneitra are displaced, seeking shelter in open areas and camps. An estimated 140,000 people remain displaced across south-west Syria, in need of safe passage out of the area.
20 July 2018
Humanitarian Aid

Following a Government-led assault on Syria’s opposition-held areas, an estimated 140,000 people in the country’s south-west remain homeless and in need of help, the United Nation Refugee Agency (UNCHR) said on Friday, calling for sustained access to displaced communities.

“A new scaling-up of assistance is needed and UNHCR continues to advocate for sustained access for humanitarian actors,” UNHCR spokesperson Andrej Mahecic told reporters at the regular press briefing in Geneva, explaining that the UN and other partners have reached tens of thousands.

During the first six months of this year, amid continued fighting and new displacements, nearly 13,000 refugees from neighbouring countries and another 750,000 internally displaced persons (IDPs) are estimated to have returned to Aleppo, Homs, Hama, Rural Damascus, Damascus, south-west and north-eastern Syria.

Mr. Mahecic pointed out that the UN’s has continued to enhance its humanitarian response for IDPs, returnees and other crisis-affected communities.

“In anticipation and recognition of this dynamic, UNHCR ramped up its capacity inside Syria already in 2017 to support refugees and internally displaced people who return spontaneously,” he stated.

In recognition of Wednesday’s announcement of a joint Syrian-Russian initiative to set up a refugee centre in Syria to help those wishing to return home, UNHCR said that while it has not yet seen any details of the plan, it is ready to engage in discussions with both Governments and prepared to work with them towards finding solutions that meet international refugee and human rights standards.

“Refugees always have a right to return,” underscored Mr. Mahecic, adding that they should not be pressured, rushed or prematurely pushed into leaving the countries where they have found shelter.

“UNHCR stresses that any plan that aims to enable refugees to exercise this right must be aligned with international standards – meaning that returns must be voluntary, they need to take place in safe and dignified conditions, and need to be sustainable,” he spelled out.

Into its eighth year, the Syrian conflict continues to exact a terrible toll on the country’s civilians. Over half of the population has been forced from their homes, and many have been displaced multiple times. 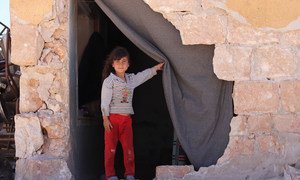