Mariana Ceratti/World Bank
The Port of Salvador in All Saints Bay, Bahia, handles both cargo and cruise ships.

Despite the improved economic growth, risks to the economic outlook are rising, the United Nations economic and social affairs chief said on Thursday, warning against “increasingly unilateral trade measures” that are challenging the multilateral trading system.

“Efforts are needed to revitalize a global partnership for sustainable development to build a universal, rules-based, open, non-discriminatory and equitable multilateral trading system,” said Liu Zhenmin, the Under-Secretary-General for Economic and Social Affairs, during a high-level policy dialogue with international financial and trade institutions, held at the UN Headquarters.

“Stronger economic growth in itself is not sufficient to ensure that these gains are widely shared,” he added.

The dialogue was organized by the UN Economic and Social Council (ECOSOC) to exchange views and insights on trends in the global economy and international trade, in the context of sustainable development.

Representatives of the International Monetary Fund (IMF), the World Bank Group, the World Trade Organization (WTO), the United Nations Conference on Trade and Development (UNCTAD) and the Department of Economic and Social Affairs (DESA) offered their projections for economic growth, international trade and other trends and challenges.

The 2030 Agenda for Sustainable Development and its 17 Goals (SDGs), adopted in 2015 by UN Member States, require transformative changes across all of the economic, environmental, and social spheres.

“All in all, a mixed picture emerges from this frontier work on sustainable development scenarios. If we continue merely with incremental progress as in the past, lots of short-term progress might come at the expense of long-term deterioration in other areas,” Mr. Liu said.

The most recent forecast from the DESA’s World Economic Situation and Prospects indicates that world economic output is expected to expand by 3.2 per cent in both 2018 and 2019.

“This improvement reflects a further uptick in the growth outlook for developed economies in 2018. It comes on the strength of accelerating wage growth, broadly favourable investment conditions, and the short-term impact of a fiscal stimulus package in the United States,” he noted.

The generally positive macroeconomic conditions create the basis for policymakers to take measures that will help to make meaningful progress towards the Sustainable Development Goals (SDGs)– which aim to eradicate poverty and hunger and protect the environment – and offer an opportunity to raise living standards on a broad scale, especially in developing regions.

“However, in parallel with the improvement in economic growth, we have seen a rise in risks to the economic outlook,” he said, warning that “increasingly unilateral trade measures are challenging the multilateral trading system.”

Mr. Liu also said that the recent acceleration in economic growth also comes with an environmental cost, and at the current rate, efforts to combat climate change are insufficient to meet the objectives of the 2015 Paris Agreement, which commits countries to keep the rise in carbon emissions from the dawn of the industrial era, to below 2 degrees Celsius. 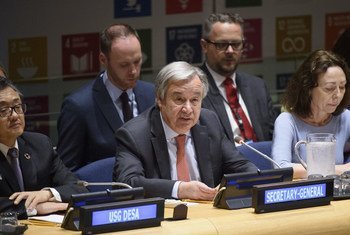