A high-level gathering of representatives from the Somali government and the international community, including the United Nations, ended in Brussels today with renewed commitment to support the Horn of Africa country’s progress in a range of areas, such as state and peace-building efforts.

Officials from 58 countries and six international organisations were present for the adoption of the so-called Mutual Accountability Framework of the New Partnership for Somalia (MAF) at the Somalia Partnership Forum, to be implemented over the next six months.

The MAF details the joint commitments of Somalia and its international partners in the areas of political reforms, security, economic development, and recovery and humanitarian assistance, as the country rebuilds after decades of armed conflict and climate-related shocks.

“Somalia opens a new chapter of its history, with the potential to fundamentally transform its future,” the UN Political Affairs chief, Rosemary DiCarlo, said in a session ahead of the MAF’s adoption.

The Under-Secretary-General added that the country’s security transition plan - which allows for Somalia to gradually assume responsibility for security across the country, including progressively transferring tasks from the African Union Mission in Somalia, AMISOM - represents remarkable progress in Somalia’s state building process

Ms. DiCarlo praised Somalia’s political leaders, many of whom were present at the forum, while noting that the implementation of the MAF’s commitments would not be possible without the allocation of adequate financial resources.

The MAF provides for Somalia and its international partners to agree on and take stock of progress in jointly achieving key objectives to strengthen the country’s state-building and peacebuilding processes. It is considered a bedrock of partnership for the country’s development.

“The United Nations is fully committed to Somalia’s future, and will support implementation of the plan,” Ms. DiCarlo said, also stressing that the world body will work closely with the African Union and all other partners.

The UN official flagged that over the next six months Somalia will need to advance its preparations for the ‘one person, one vote’ elections in 2020-2021 and the constitutional review process, and ensure solid agreements are in place regarding the allocation of powers and resource-sharing between the central government and federal member states.

The political roadmap, Ms. DiCarlo highlighted, will also need to provide for gender-inclusive politics, and a significant engagement with civil society and private sector actors.

Organized by the Federal Government of Somalia, the European Union and Sweden, the Forum is a recurring international gathering to promote peace and development processes in the Horn of Africa country.

This week’s forum follows on from gatherings held in London and Mogadishu over the past two years. Another high-level meeting will be held in six months’ time to take stock of the outcomes of the Brussels meeting. 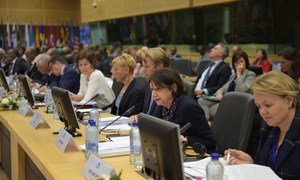 Speaking at the first day of the Somalia Partnership Forum in Brussels on Monday, senior United Nations officials commended the country’s government for its efforts in political reform, security, economic development, and recovery and humanitarian assistance – while flagging the need for further progress and international support for these efforts. 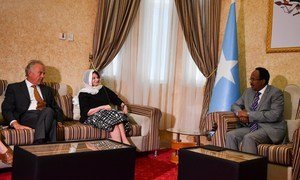 Unity is essential for Somalis to achieve lasting peace and stability, the top United Nations political affairs official said on Thursday during a visit to the Horn of Africa country, which faces numerous challenges, including the establishment of an effective federal governance system and a combat against Al-Shabab insurgents.